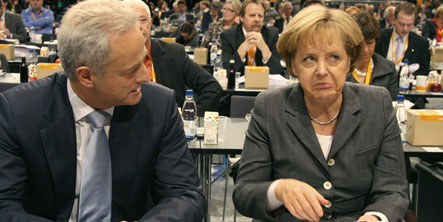 The Christian Social Union (CSU) is the regional incarnation of Merkel’s Christian Democrats (CDU), however, the two parties have been at odds over how much needs to be done to ignite Europe’s largest economy.

“Any further measures to stabilize the economy must include sizable tax relief,” Peter Ramsauer, head of the CSU parliamentary group, told the Financial Times Deutschland on Thursday. “That is crucial for the CSU. We won’t support another stimulus package without tax cuts.”

The conservatives in Bavaria have been highly critical of Merkel’s cautious approach to the global economic crisis. But she hinted this week that her coalition – which includes the CDU, CSU, and the centre-left Social Democrats (SPD) – would likely cobble together a second raft of stimulus measures in January.

However, the CSU call for tax cuts will not please Finance Minister Peer Steinbrück, who on Thursday told daily Bild that he would prefer to lower German social security contributions.

“Lowering taxes doesn’t do much and it offers relief to the wrong people. It helps only those with higher incomes, who already have a high savings rate,” Steinbrück, a Social Democrat, told the paper. “It would make a lot more sense, especially in the lower income bracket, to lower social security contributions.”