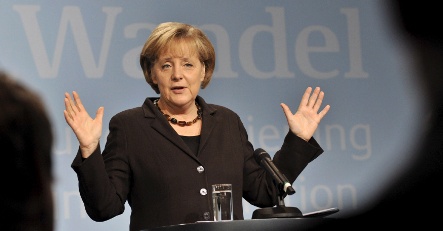 According to Merkel, who grew up in East Germany, “There is now a backlog of need” in western Germany, in an interview to be published Thursday in the political magazine Cicero.

Helping depressed former East Germany has long been a priority for the government. The eastern states are still struggling with massive unemployment and under-investment, and has one trillion dollars has already been transferred from west to east since reunification.

“When I travel through the old federal states (western Germany), I see many townhalls, schools, and public buildings dating back to the 1960s and 70s, while so much in the east is new,” Merkel said.

The federal government is currently considering a massive boost in public spending, notably to help renovate buildings and transportation networks, in a bid to counter the economic recession.

“When considering financial incentives to foster investment, the government will take into account the fact that the west has taken a back seat to the east since reunification,” Merkel said. “Now it is the west’s turn.”

Next year marks the 20th anniversary of the fall of the Berlin Wall with a peaceful revolution on November 9, 1989. National unification followed 11 months later.

Since then the eastern states have lagged behind the more prosperous west on average, with slower economic growth and double the jobless rate.