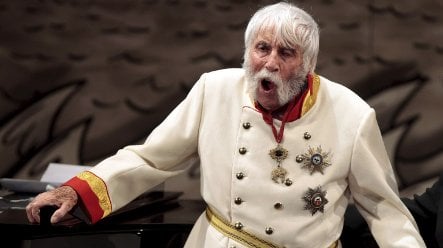 Heesters performs on his 105th birthday on December 5. Photo: DPA

The actor and singer, who turned 105 in early December, had said that the accusations made by writer Volker Kühn that he was invited to the death camp by the SS and sang for them there in 1941, were wrong and scurrilous.

But the court said there was no way to determine whether Heesters performed for the SS during this time or not. Kühn will therefore be allowed to present his evidence that Heesters did indeed take part in such a performance.

Heesters has never denied having visited the camp in 1941 as a member of the Munich Gärtnerplatz Theatre Ensemble, but says they were effectively ordered to go – and says he never sang. He claims the SS had forced the group to go to the camp, but there had been no special performance.

Kühn has based his publication on eye witness statements of a Heesters performance for the SS, according to the Frankfurter Allgemeine Zeitung in October.

Heesters seemed to work against these claims on December 3 when he made headlines for calling Adolf Hitler a “nice guy” in a TV interview on Dutch television for his 105th birthday. He has since apologized for the statement, saying he was set up by his interviewers.