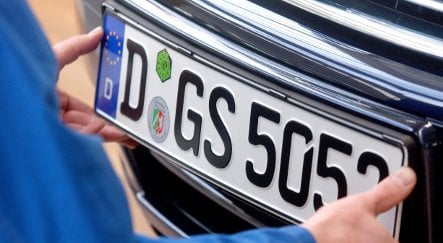 In the struggle against right-wing extremism, the Brandenburg Constitutional Protection Authority has warned of several licence plate letter and number combinations that extremists use to identify themselves to the public. “These also serve as identifying marks among the like-minded,” the authority reports in their brochure and internet article “False Identification—Critical Combinations on Motor Vehicle Codes.”

Number combinations that have recently been identified include “18,” which represents the first and eighth letters of the alphabet, or “AH” for Adolf Hitler), “88” stands for “HH,” or “Heil Hitler,” and the number “14,” which alludes to a fourteen-word (German) slogan uttered by an American neo-Nazi leader: “We must secure the future for our people and the future of our white children.”

Thousands of Brandenburg residents bearing these combinations could now be suspected of extreme right-wing affiliations, though in some cases the combinations may be accidental. The cars of supposed right-wing extremists can be subject to attacks, daily newspaper Die Welt reported on Monday. Someone destroyed a neo-Nazi car in Königs Wusterhausen this October, the paper said.

The German Federal Ministry of Transport recommended in 2000 that German states refrain from using combinations that allude to former National Socialist associations or institutions, such as “SA,” “HJ,” “SS,” “KZ,” and “NS.” The German government is now recommending auto registration offices stop assigning combinations that “refer to controversial organisations and parties” too.