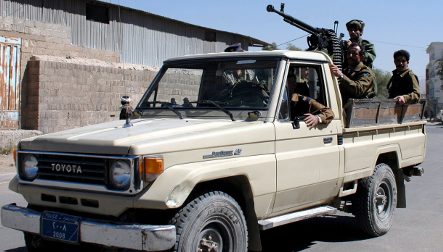 The three were seized on Sunday in the Bayda area southeast of Sanaa and taken to Bani Dhabyan, which lies south of the capital and is difficult to access, a security official said on condition of anonymity.

A Western diplomat said the hostages were a German couple and their daughter, who works in Yemen for a German development group. A tribal source told AFP that the group was kidnapped by tribesmen, who have frequently used foreign hostages as bargaining chips in disputes with the government.

“They are in a safe place and in best health conditions, and they are being treated as guests. Their capture was only to pressure the authorities,” a source from the Bani Dhabyan tribe which is close to the kidnappers said.

He said one of the kidnappers was demanding the release of his brother and son, who were arrested four months ago over a land dispute and were being held without trial.

“The mother and father were on a visit in Yemen, and they were kidnapped with their daughter as they were sightseeing in the province of Bayda,” the diplomat said on condition of anonymity.

The tribal source said the daughter was working with a German development group that is building sewage projects in Yemen. In Berlin, German Foreign Ministry spokesman Jens Plötner said the three had been missing since Sunday from the outskirts of Sanaa and “we assume they have been kidnapped.”

Yemen’s powerful tribes have repeatedly abducted Westerners in recent years to put pressure on the government in Sanaa to respond to their demands. More than 200 foreigners have been abducted over the past 15 years.

All have been freed unharmed except for three Britons and an Australian seized by Islamist militants in December 1998. They were killed when security forces stormed the kidnappers’ hideout.

Yemen, the ancestral homeland of al-Qaeda chief Osama bin Laden where tribal traditions prevail, is one of the poorest countries on the planet and awash with weapons.

The southern Arabian peninsula country has seen several attacks by al-Qaeda, including the October 2000 suicide bombing of the destroyer USS Cole that killed 17 American sailors. Two Columbians who were kidnapped in Yemen in September were released after one day.

The same month, five Germans were part of a group of 19 European and Egyptian hostages seized by bandits while on safari in a lawless area of Egypt’s southwestern desert on the Sudanese and Libyan borders and later freed.

In December 2005, armed Yemeni tribesmen captured a former German ambassador and foreign ministry number two, his wife and three children and held them for about five days.