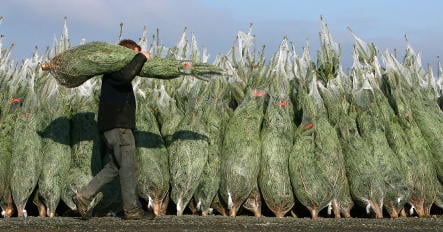 “The Christmas business is ruined,” 65-year-old Annegret Tersteeden told the paper of her spruce tree stand on Sunday. The retiree had some 3,000 trees, the majority of which are no longer suitable for sale.

The paper speculates that the Grinch-like crime was committed by what it calls the “Christmas tree mafia,” because of stiff competition between tree sellers in the area.

“It was an act of revenge,” Tersteeden said of the damaged spruce and Nordmann fir trees. “Who would buy a tree without a top that stinks like oil?”

The “beheading attack” could have been a disgruntled tree seller who had been forbidden by city authorities to set up shop in the same area last week because he didn’t have a permit, she said.

But the paper spoke the merchant in question, who said he had not destroyed the trees.

“We’ve never had anything like this,” police spokesman Heinz van Baal told Express. “One can’t just do this in passing. It was several perpetrators at work throughout the night,” he said, estimating the damage to be above €80,000.

“I’ve been doing this for 30 years to enhance my small pension,” Tersteegen said. “This mess just before Christmas has effected me deeply.”