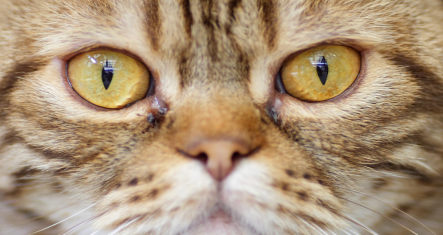 Humans say too much telly can ruin your eyesight, right? Photo: DPA

The first letter from the GEZ addressed to Winni in Bochum made the cat’s owner Doris G. laugh. But when the fee collectors wrote again demanding to know whether “Herr Winni G.” owned a television or radio subject to the fee, Doris G. got angry, the paper reported.

“Winni is our cat,” she said, adding that she has no idea how the organisation got hold of her furry housemate’s name.

But the Cologne-based GEZ said it was just a routine letter. “It is a normal informational letter in which we ask non-registered adult individuals to verify whether they possess equipment ready for broadcasting,” company spokesperson Willi Rees explained. To do this, the GEZ leases data from address providers. “And it can happen that even a pet gets a letter,” Rees told the WAZ, saying the family could have used the cat’s name at some point in for a prize draw to increase their chances of winning.

“Mr. Winnie G.” has been deleted from the GEZ register, but the letter is an example of reasons why the organisation is often criticized for desperate measures to cash in on the broadcasting fees. Last month they tried to charge a beagle called Sam in the Bavarian town of Amberg.

GEZ stands for the mouthful Gebühreneinzugszentrale der öffentlich-rechtlichen Rundfunkanstalten in der Bundesrepublik Deutschland, or “fee collection centre of public-law broadcasting institutions in the Federal Republic of Germany.” The organization requires a license to own and use televisions, radio and sometimes internet. The fee money funds public broadcasters such as ARD and ZDF.