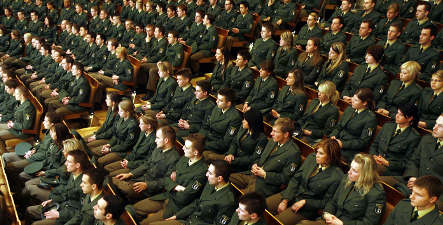 Berlin needs you! At least that’s what the initiative Berlin braucht dich! is telling young minorities, who might be interested in working for the city.

With Germany’s capital attracting a growing number of immigrants, officials behind the programme believe the public sector has to adapt to show the changing face of the city.

“The demographics in civil service should reflect those of the overall population,” Agnese Papadia, spokesperson for Berlin braucht dich!, told The Local.

She said the city could only benefit by recruiting young people from immigrant backgrounds via the programme – started by the the Berlin Senate-supported organisation Career Qualification Network for Immigrants (BQN) in 2006.

“They can often speak many languages, not only German but also Turkish and Arabic, for example. When immigrants come into public offices it is easier for them to communicate,” Papadia said. “They also possess other intercultural competencies. They know what it means to be an immigrant.”

According to the BQN, some 40 percent of Berlin’s under-18 population come from families who have immigrated to Germany in recent generations – but only 10 to 13 percent of young people receiving career training in civil service have such a background.

“Many young people with immigration backgrounds never receive any career training, and the civil service can offer them a big opportunity,” Papadia said.

The campaign reaches out to young people with immigration backgrounds through school visitations, literature and the internet, offering advice on how to obtain career training positions in the civil service sector.

One of the newest facets of the initiative is the traveling exhibition Berliner Verwaltung zeigt Gesicht (Berlin administration shows its face), which has been making its way around city offices since June. Featuring the portraits of twelve minority trainees, the exhibit shows them as models for others in search of career direction.

The subjects represent such countries as Turkey, Poland, Serbia, Lebanon, Ukraine, the Philippines and Bosnia. While some have emigrated themselves from these countries, others were born and raised in Berlin, but come from immigrant families.

“My family and other immigrants I meet are proud. They say it is time for people with migration backgrounds to take on this career,” said 21-year-old Meriban Aktas, born in Berlin to Kurdish parents and receiving career training in the Senate Administration of the Interior and Sport.

One of several advantages of a job in Berlin civil service is that “the future and salary are more secure,” she told The Local.

The exhibition also showed a 26-year-old named Hasan – who is currently a trainee with the city’s police. In his biography next to his portrait he said his example is inspiring his nieces and nephews to also join the force one day.

“That is integration,” he said.