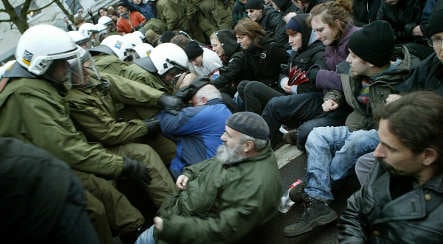 It was a spectacular illustration of Winston Churchill’s witticism that democracy is the worst political system – except for all the others.

Right along Sewanstrasse in eastern Berlin on Saturday, a wall of riot police held back hundreds of punks, anarchists and assorted leftists. Down the road, about 700 neo-Nazis were champing at the bit to continue their march, chanting: “National socialism, now, now, now!”

When the anti-Nazi protesters blocked the road for the second time, the police lost patience. One by one they dragged the protesters, young and old, off the road and into police vans. Then they formed a human phalanx and charged like rugby players, knocking people aside without discrimination – a few journalists included.

For good measure, the water cannon trucks went in, accelerating to a frightening speed and blasting anyone in sight. By this time, law and order was out the window; bottles were being thrown, glass recycling bins overturned and cars vandalised.

What should have been an admirable stance against xenophobia and demogoguery had turned into a fight between the leftists and the police while, back down the road, the neo-Nazis were having a good chuckle. By the end of the day, nought had been achieved aside from a few criminal records.

Counting the salaries of 1,600 police and the cost of running helicopters, water cannons and police vans, I’d guess – though the police declined to comment – Berlin spent at least €200,000 it cannot afford to ensure that a bunch of knuckleheads could exercise their democratic right to march while being abused by another bunch of knuckleheads.

As a still fairly new arrival to Germany, it got me thinking: who wins when we defend people’s right to act like bigots and idiots? Is it possible that a liberal democracy’s tolerance of all views might actually sap its strength?

Let’s weigh up the situation. The neo-Nazis had a permit to march. Fair enough; you can’t ban people from marching, however deplorable their message. They were, for most part, well-disciplined. Only late in the afternoon, when darkness had fallen and we found ourselves with no police nearby, did my companions – a female photographer and a young male journalist – and I feel threatened when a neo-Nazi jostled the photographer for taking his picture and another loomed on us with a handkerchief covering his face.

The anti-Nazi demonstrators, by contrast, were a rabble. Don’t misunderstand me; it is a fine reflection on modern German society that people bother to get out on a cold Saturday and show their abhorrence toward the worst ideology mankind has ever constructed. It is only a shame that the “fuck the police” brigade overshadowed the well-intentioned.

“We are peaceful! What are you?” the blockaders chanted to the police as they were hauled away wriggling with all their might. This is disingenuous. Blockading is not peaceful. It is an act of implicit force, since they are physically barring the marchers and know very well that the police are obliged to remove them.

That is precisely what the police did, with great skill and professionalism. It wasn’t gentle, but nor was it excessive. And this is the point: caught between jackbooted Nazi thugs and bottle-throwing leftist fools, a well-trained and accountable police force shepherded more than 1,000 angry people through an incendiary afternoon and brought the day to a close with no injuries and with both sides going their separate ways having exercised their democratic rights.

It may be small comfort to the taxpayers of Berlin, but there is a virtue to a day like Saturday: it tests the system. The firm but fair treatment received by both sides was the expression of the will of the majority who want neither fascism nor anarchy. Think of it as a minor infection in the big toe of the body politic. It strengthens the immune system.

So who won? You did. The stable, tolerant democracy this country built after the Second World War and consolidated after reunification survived with its dignity and its principles intact. Just another perfect Saturday afternoon in Germany.

David Wroe, a Berlin-based freelance journalist from Australia, is a frequent contributor to The Local.