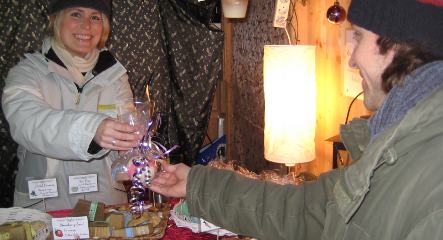 Justin Burns is standing in front of his own stand, smelling, feeling, and comparing his own wares. He’s doing his best to look like a Christmas market customer.

“This really works!” Burns says. “People want to know what all the fuss is about if they see someone already standing here.”

Theories of group dynamics aside, business is slow on the first Saturday night of the Advent market in Neusäß, an outer suburb of the Bavarian city of Augsburg.

Burns, a Canadian who moved to Germany four years ago, and his partner, Sigrid Steiger, are first-time Christmas marketeers. The couple started making a range of all-natural, scented soaps in their kitchen in June, intended as personalised gifts for friends and family. But the gifts were so popular, they decided a Christmas market stand would be the perfect proving ground to see if the soap could become a fully fledged business.

“It’s really a bit of an experiment,” Burns says. “We’ve invested a lot of time and money into this and if it doesn’t go so well, we won’t come back next year. It’s not looking too good at the moment.”

The Neusäß Christmas market is typical of thousands of smaller markets across Germany. Unlike the tourist-pulling affairs of Dresden, Berlin or Nuremburg, it feels laid-back and familiar.

There’s a miniature train ride for the kids called the “Bayernexpress” around a circuit of oversized garden gnomes. A Klofrau watching over the restroom asks her “customers” for help with a crossword and a Christian choir sings sickly soul-healing melodies that were perhaps better left in the 1950s.

About half of the 40 stands are selling food and drink: Paper cones stuffed with hot chestnuts, bratwurst in warm buns and the hot, spicy beverage of choice, Glühwein.

Other stands offer gifts like wood carvings, candles and crib figurines. A small barnyard hosts a nativity scene, complete with a trio of real sheep munching hay and thanking God it isn’t shearing season yet.

“We didn’t know the weather would be so much of a factor,” Burns says.

It’s freezing. Germany’s Old Man Winter doesn’t always dust the ground with a delightful coat of powder snow and turn the markets into a frosty wonderland. He often drizzles and pours. And when the thought of Christmas shopping under driving rain is too much to bear, the shoppers stay at home.

There’s also a big “familiarity factor” at smaller, community based Christmas markets. If the shoppers don’t know who you are, they’re less likely to buy from you.

“Everyone said that their first year was hard, because it’s mostly locals that come here,” Burns says. “They’ve got to get to know you first. With us, maybe they’ll want to take some soap home and see how it feels first before they decide to buy more.”

Even though few are buying, visitors to the stand are cheery and seem genuinely interested in the couple’s products.

“We joked on the first night that if compliments were money, we’d already be rich!” Steiger says.

Starting your own Christmas market stall is no walk in the park. As with everything in Germany, there are rules. Burns said that although the Christmas market bureaucracy wasn’t exactly a minefield, there were a few obstacles along the way.

Finding a venue was the first challenge. Renting a stand at a smaller market isn’t prohibitively expensive but a spots can be notoriously hard to come by. Organisers (typically town and city councils) only allow a set number of vendors and most stands are held over year after year for the same vendors.

Making things harder, organizers often try to protect their established stands by only allowing one vendor for each kind of gift.

“The problem was that if there was already someone there selling soap, they didn’t want us there selling it to,” Burns says. “But it’s kind of hard to understand it from an anti-competition angle when there’s dozens of places all selling Glühwein.”

Steiger and Burns’ stand cost €150 for each weekend at the Neusäß Christmas market – a total of 18 opening hours from Friday to Sunday. Vendors also pay for their own electricity. But market stands in bigger cities with more foot traffic can cost much, much more.

Burns also stresses the stand has to look inviting, with well-displayed products and subtle decorations. “The organisers made sure that we were going to decorate it tastefully, with no flashing lights or anything.”

But most of all, prospective Christmas marketeers should bring plenty of patience and the determination to persevere.

By Sunday evening the rain has all but stopped. The smell of roasted chestnuts once again wafts over the market and groups of friends are gathered around cosy gas heaters, enjoying the festive spirit. The stand run by Steiger and Burn is attracting many more passers-by, and this time they’re not just looking, but buying. 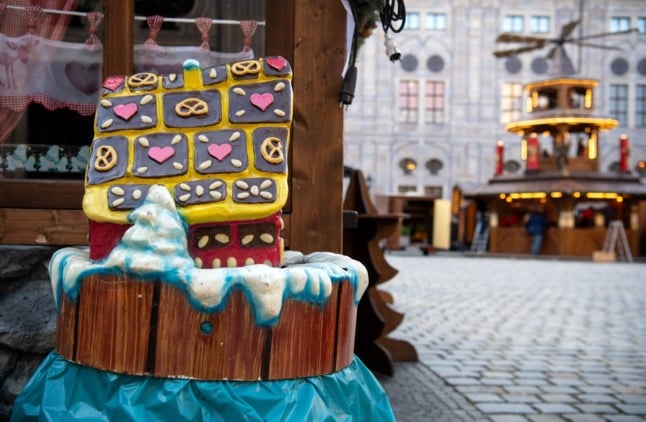