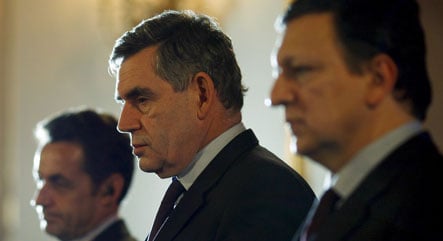 But German Foreign Minister Frank-Walter Steinmeier Monday criticised the absence of Chancellor Merkel, head of Europe’s largest economy. “I don’t think it’s good that the three are meeting alone and that the chancellor is not there. There will certainly be some squabbles before the next European summit,” he said on German television.

Steinmeier added it was not appropriate for Barroso to be attaching importance to the London meeting when efforts were being made around Europe to ensure the Brussels summit was a success.

Merkel has faced criticism that her €31-billion bailout plan for Germany over two years does not go far enough, while Britain – which has led the way – France and the European Commission have been bolder. But Brown, Sarkozy and Barroso insisted there was no disagreement with Germany on how to tackle the financial chaos ahead of the high-profile European Council meeting.

“I do not share the view according to which on the eve of our European Council, there is disagreement on the seriousness of the crisis and the need for stimulus,” said Sarkozy, whose country holds the rotating EU presidency. “Our positions have become much closer in the last few weeks,” he said, adding that all three leaders had telephone conversations with Merkel on Sunday.

For his part, Barroso said there could be no “one size fits all approach” to the credit crunch which would suit all 27 EU countries. “It would be a complete mistake to think all countries have to be exactly the same,” he said. “I have full confidence in the efforts that Germany is making… it would be completely, completely unreasonable to think of any plan without the active cooperation of Germany.”

Brown added there was “common agreement between all the major countries.” The British premier’s bailout plan for Britain’s banks in October drew plaudits from around the world and his government announced an economic stimulus package worth £20 billion (€23 billion) at the end of last month.

For his part, Sarkozy, whose country currently holds the rotating EU presidency, last week unveiled a rescue plan to inject €26 billion into the economy in 2009.

The European Commission has also proposed a €200-billion stimulus package aimed at hauling eurozone economies out of recession which will be discussed in Brussels later this week.

Germany’s Finance Minister Peer Steinbrück reportedly rejected calls for it to spend more on tackling the economic crisis last month, saying that “just because all the lemmings have chosen the same path,” that did not make it right.