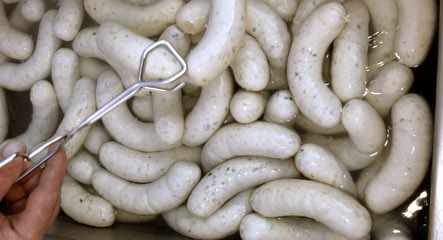 The Federal Patent Court said it needed more time to determine whether there should be geographical trademark protection for the sausages actually produced in Munich, banning other producers across Bavaria from labelling their white sausages with the promotional brand name Münchner Weißwurst.

Butcher associations and meat-producers have been protesting against the restrictions posed in 2005 without any luck. Many want all of Bavaria to be able to sell their sausages under the popular name, as they fear that the delicacy otherwise will only be available in regional supermarkets. Or maybe even as a canned or frozen product – a nightmare for every sausage fan.

“Lately it’s become extremely clear that there are many contradictions,” presiding Judge Roland Vogel said on Monday, adding the court would need a few more weeks to reach a decision.

The composition of the sausage was defined by Bavarian authorities decades ago in 1972, when cheap import products threatened the quality image of Munich’s favourite meaty treat. According to this “purity law” the Weißwurst has to contain a minimum of 51 percent veal. But many producers ignored the law for financial reasons. Therefore a Munich butcher and gastronomical association called “Save the White Sausage” wanted to designate that it could only come from the city in an attempt to ban inferior knock-off products.

Should the court rule in favour of Munich producers, there would then be an effort to give the sausage similar geographical trademark protection allowed Italian Parma ham and Greece’s feta cheese in Europe.

The traditional Bavarian sausage is made of veal, pork, belly fat, onion, parsley and spices and is usually eaten with sweet, grainy mustard as a little snack between breakfast and lunch.

A legend says that the sausage should never hear the church bells ring at noon. That is due to a time before modern refrigeration when the Weißwurst would go off during the day, as it didn’t contain any preservatives.

The traditional way of eating a Weißwurst is sucking it out of its skin which is called zuzeln in Bavarian dialect.