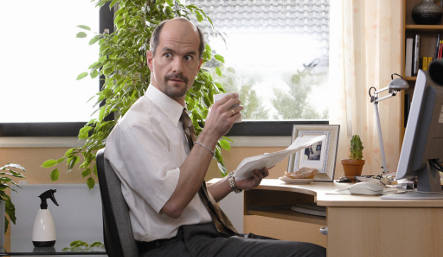 Stromberg asks: 'Have you geupdatet these reports?' Photo: DPA

German business people often sprinkle their conversation with words like “global player” and “shareholder value,” but company heads are taking a new approach, the paper reported.

“There is a definite weariness of the anglicisation by people in charge,” author of the book “Deutsch für Eliten” or “German for Elites,” Roland Kaehlbrandt told the paper on Thursday. “The compulsive need to show being international with language is diminishing,” he said, adding that it’s well-known that many Germans can also speak English.

While the practice of using a mix of German and English – commonly called “Denglish” – has not fallen completely out of fashion, one hears words like “milestone” and “state-of-the-art” from middle management. “Those who use the phrase ‘high potential’ probably do not possess the same,” Die Welt wrote.

Instead of touting their English skills, company managers have taking to a new style the paper likens to “preaching” – talking of trust, corporate responsibility and the environment instead of expansion and restructuring.

“At some speeches one wonders if the company even wants to earn money,” President of the Zeppelin University in Friedrichshafen Stephan A. Jansen told the paper, adding that the rhetoric is somewhere between Sundays in church and the an event at the YMCA.

“In a media society, business leaders can’t say anything right anymore,” Jansen said, adding that managers are likely attempting to avoid criticism by using language that’s too slippery to hold onto.