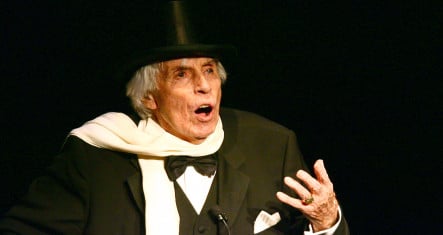 The Dutch actor and singer, who is currently is suing an author over claims that he was connected with Nazis in the past, seems to have worked against himself by making objectionable comments on the television show on the occasion of his 105th birthday.

“Adolf Hitler, God, I know that man only little, but a guy, you know, that’s what he was, a nice guy,” Heesters said in the interview that aired on Wednesday evening.

Reporters of the De Wereld Draait Door show are known for asking leading questions and tricked Heesters with asking if “Hitler was a nice bloke.”

Heesters, who spoke both Dutch and German during the interview, said he is aware that he accidently expressed himself incomprehensively, but claims he was set up.

Heesters, who will turn 105 on Friday, sued Berlin writer Volker Kühn last month for allegations that he was invited to the death camp by the SS and sang for them there.

The centenarian has never denied having visited the camp in 1941 as a member of the Munich Gärtnerplatz Theatre Ensemble, but says they were effectively ordered to go – and says he never sang.