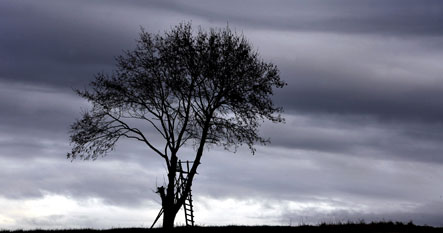 It’s not even four o’clock and already the sun is slinking off to enjoy 16 hours of slumber. It was doing a feeble job anyway of beating away the clouds, which are so low they seem to be brushing the top of your head.

You may, according to German doctors, be suffering from winter blues, known in psychiatry as seasonal affective disorder or SAD, a mysterious condition that seriously affects one in 25 people in Germany, touches many more, and can drive sufferers to suicide.

If you are a young woman, you are especially prone; the illness strikes women at four times the rate of men and hits people hardest while they are young.

The condition is enough of a worry that one of the world’s leading experts, Professor Andreas Heinz from Berlin’s Charité hospital and university, gave a free lecture last weekend to explain the science of SAD and offer some solutions.

”One should not underestimate it because winter depression can really impair your quality of life,” he told The Local afterward. ”Up to four percent of people have serious winter depression but there are many more who just feel a bit down. It’s a question of degrees. The important thing is that both winter depression and normal depression are well-treatable conditions.”

Now is the time that winter depression will start to bite. The days are a little under eight hours long. On the winter solstice, December 21, the sun will be up for a paltry 7 hours, 39 minutes, rising at 8:15 am and setting at 3:54 pm.

During that brief window, your brain will be using the neurotransmitter serotonin to keep you bouncy and active. Serotonin promotes good moods and people with serotonin dysfunction are at risk of depression. About an hour after dark, when decent amounts of light have stopped entering your eyes and hitting your retinas, your serotonin will peak, after which some of it is converted to melatonin, a hormone that tells your biological clock it’s time for sleep.

Longer nights mean more melatonin and, although the science is not fully understood, research suggests that the more time we spend awake during the melatonin phase, the greater is the risk of depression. For people who suffer full-blown SAD, the interplay between serotonin and melatonin seems to throw their biological clocks into total chaos.

Before artificial light, our ancestors simply slept longer during winter nights. Today we soldier on through darkness, going to work and coming home in darkness. So although doctors have been noticing some form of winter depression since Hippocrates in ancient Greek times, it is a particularly modern curse.

According to Professor Heinz’s own research, the hormone cortisone – produced in response to stress – and a part of the brain called the

But again, the reasons are not fully understood. It is also unclear why women are at such risk, though Melatonin’s close connection to female reproductive hormones suggests it could be related to the menstrual cycle.

The symptoms to look out for, Professor Heinz says, include low mood, lack of motivation, an inability to enjoy normally fun activities, feelings of guilt, overtiredness, a craving for sweet or carbohydrate-rich foods and weight gain (unlike normal depression, in which sufferers are often unable to sleep and lose their appetite).

The good news is that neither Germany’s relentlessly grey skies nor the notorious German ”angst” are thought to make people here more susceptible. Grey skies still contain plenty of light – much more than indoor artificial lighting – and angst, while perhaps putting Germans at risk of obsessive-compulsive disorders, is unlikely to contribute to winter depression, Professor Heinz says.

To avoid the wintertime blues you ought to get as much sunlight as you can. Go for a walk in the morning and play some sport if you can, as physical exercise reduces melatonin levels.

Special lamps are available that produce very bright light. These are as effective a treatment for winter depression as anti-depressants such as Prozac and Zoloft, Professor Heinz says.

But you should see a doctor first, he emphasizes. Lamps can have side effects such as retina damage and irritability. There is a danger that depression sufferers may increase their motivation without boosting their mood, putting them at risk of suicide.

Most importantly, don’t be ashamed to seek help, he says. Berlin hospital figures reveal that the number of people admitted for depression rose 50 per cent between 2000 and 2004.

”The stigma about depression is finally going down,” Professor Heinz concluded. ”Thank God.”

Charite’s Mitte campus in Berlin offers trials of light therapy and can provide advice and consultations.

Alternatively, see your general practitioner for help or a referral to a specialist in other German cities. Do this before you shop for lamps or other treatments.