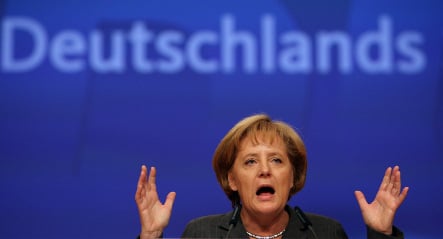 With the world facing the greatest financial crisis since the Great Depression, one might expect leaders from Tokyo to Timbuktu to be in a state of panic right now. But not Germany’s Angela Merkel.

The proverbial sky might be falling, but the chancellor seems rather unfazed by bank closings, plunging stock markets, terrified consumers and collapsing demand for German exports.

Whereas other politicians from top industrial nations appear to be trying to outdo each other with measures to combat the dramatic economic downturn, commentators at home and abroad are lambasting Merkel for all but disappearing from the global stage.

This week, the newsmagazine Der Spiegel put her on the cover under the title “Angela the Fainthearted: The chancellor’s dangerous dithering over the economic crisis.” The Economist, the British weekly that once praised Merkel’s international leadership and acumen, simply stated in its latest edition: “Miss World goes missing.” If she were starring in her own film it might be titled “The Incredible Shrinking Chancellor” considering all the heat she’s taking at the moment.

Is such criticism warranted? Merkel’s government quickly pushed through a bailout package for beleaguered banks and has passed a modest stimulus package. But she has steadfastly refused to back more measures that could help reignite Europe’s largest economy – which is already in recession and expected to stagnate next year. Tax cuts? Nein. Investing buckets of cash in green technologies? Nein.

“We won’t take part in a constant competition of ever new proposals, in a senseless competition about billions,” she said in a speech to the annual party congress of her Christian Democratic Union on Monday. “I will not stand for it.”

Of course, being reluctant to spend taxpayer money or balloon the budget deficit are both commendable aims. But with the planet facing the prospect of global financial meltdown right now, half of leading during times of crisis is giving the impression you’re proactively doing something even if unfolding events are largely out of your control.

But playing the hero rushing into burning house to save the economy just isn’t Angie’s bag.

This is partly because the chancellor is by nature a cautious person. Trained as a scientist, she eschews political grandstanding and rhetorical hyperbole for quiet contemplation and unhurried decision-making. And Germany has also long been a bastion of fiscal responsibility in Europe, making the country’s politicians loath to splash out like notoriously profligate Italian and Greek governments might.

But at a time when calming jittery financial markets and cowed consumers is crucial to averting a downward economic spiral, Merkel’s reticence makes her appear as if she’s twiddling her thumbs instead of taking the helm.

Of all major European countries, Germany right now is probably in the best position to afford a little more fiscal stimulus either via tax cuts or investment.

But this government isn’t known for showing much concern for sparking consumer demand. Hitting people’s pocketbooks where it hurts the most, Merkel’s coalition raised sales tax by three percentage points to a whopping 19 percent in 2007. If the coalition wanted to get people spending it could now lower the VAT for a limited time, but Peer Steinbrück, Merkel’s finance minister, has dismissed such tax cuts as “ineffective populism” that would simply empty the government’s coffers.

Of course, maybe Merkel isn’t failing as an effective crisis manager and is just operating as cunningly as she always has. Germany depends heavily on exports, so perhaps Merkel and Steinbrück think if the rest of the world is blowing billions to jump-start their economies then that will once again spark demand for quality German products. Why pay for a recovery when other leaders in Washington, London and Paris will do it for you?

But if Merkel finds she can’t export the country out of the recession she might truly shrink from the Chancellery after the next general election in the autumn of 2009.