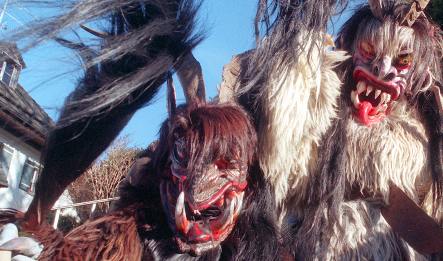 The troll-like Perchten emerge when it gets dark. The gnarled and gruesome figures stomp through the Christmas markets of Bavaria, making a loud ruckus and sometimes even harassing market visitors. According to tradition, these horned creatures come out mainly during Christmas to drive away winter with loud noises. They are similar to the better-known Krampus, the trollish figures who accompany St. Nikolaus in the region.

And while everyone enjoys a bit of tradition, a pack of Perchten from Lermoos who mobbed the Wolfratshauser Christkindlmarkt over the weekend apparently went to far. Not everyone enjoyed it, tz reported. One woman from Geretsried said had to flee for cover with her daughter because the girl was too afraid “of the monsters.” Many other children were having “crying fits,” the girl’s father told the paper.

“It would be better if [the Perchten] came out at 10 pm rather than 5 pm,” Wolfsratshauser resident Monika Kleine complained, adding that her daughter has been afraid to go to the bathroom alone at night. “Have these gruesome figures been invited?”

The Perchten were in fact invited to the Christkindlmarkt by the mountain preservation organization of Wolfratshausen, responsible for preserving the Alpine customs of the area. “We are conforming to the tradition of the high country,” company Captain Ewald Brückl told the paper. “After all, we are not from Hamburg or Wanne-Eickel,” adding that it’s not unheard of for “hotheads venture into the Perchten invasion,” though this weekend’s scare was an exception.

Wolfratshausen Mayor Helmut Forster took the parents’ side. “I regret it very much when children are afraid,” Forster said. “In the future there will be no more Perchten at the Christkindlsmarkt,” told the paper.

“The newcomers have to get used to this tradition,” Brückl told tz. Although said he was sorry that some children are scared by the Perchten, one shouldn’t forget “that children are also scared of Santa Claus,” Brückl said. “Here [parents] are complaining – and they let their children see other horrifying things on TV and the internet.” he added.