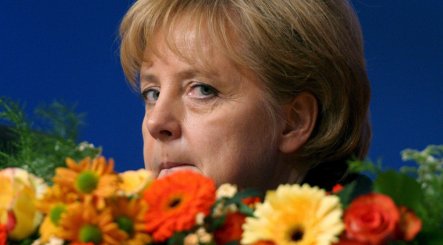 Merkel sought to slap down critics at the start of the Christian Democrats’ (CDU) two-day convention in Stuttgart, southern Germany, resisting calls for broad-based tax cuts to get Europe’s biggest economy moving again.

“We will not take part in a race to top the latest proposals, in a senseless race to spend billions,” she said in a defiant speech dominated by her defence of her economic policy.

Merkel said “all options would be on the table” when her cabinet meets in early January to assess the impact of a package of temporary tax breaks and infrastructure spending rolled out last month, which she values at €32 billion ($40 billion) over two years.

But she said Germany had been well-served in the past 60 years with a reliance on fiscal responsibility and the social market economy and said that system should be exported worldwide to avert similar turmoil in the future.

“Germans can rely on a government that acts responsibly and vigilantly, and when necessary, springs into action,” she said. “The social market economy is the key to a lasting recovery from the crisis. It is the key with which the excesses of the markets will be checked.”

She called for a “global economic order” shaped by a strengthened United Nations Economic and Social Council (ECOSOC), which she acknowledged was currently only “pitifully peripheral.”

On the eve of the CDU congress, Merkel had managed to push a resolution through the party’s board ruling out fundamental tax reform until after the September 2009 federal election. And on Monday she was re-elected unchallenged as party chairwoman with nearly 95 percent of the vote – two points better than her last election to the post in 2006.

In her address, Merkel argued that trying to spend its way out of recession would only lead Germany’s notoriously frugal consumers to stash extra cash rather than indulge in a shopping spree, and would do lasting damage to the federal budget.

“A balanced budget may be postponed but it is still the goal,” she said.

Merkel is still buoyed by strong poll ratings – the Christian Democrats hold a double-digit lead over the Social Democrats, their main rivals and current partners in Germany’s fractious “grand coalition” government. But calls for more concerted action have not abated, with employers and rebel Christian Democrats clamouring for an ambitious stimulus package similar to the ones in the works in the United States, Britain and France.

Jürgen Ruettgers, the CDU premier of Germany’s most populous state, North Rhine-Westphalia, said in an interview published Monday that taxpayers needed immediate relief to help fire up the economy.

“People have spent the last 10 years without seeing a rise in their net income – the time has come to talk about (tax) breaks,” he told the Handelsblatt business newspaper.

Merkel has also faced pressure for across-the-board tax cuts from the CDU’s Bavarian sister party, the Christian Social Union, and the party with which she would like to form a coalition after the 2009 poll, the pro-business Free Democrats.

It said Germany’s recession, seen as likely to be its deepest in decades, was Merkel’s first true test since she came to power in November 2005 and warned that inaction was putting the economy at serious risk. But Merkel said Monday the conservatives needed the courage to “swim against the tide” with policies guided by “common sense.”

“Why is the world in the situation it is? Because we listened to experts who had no expertise. We may not have known that then, but we know it now,” she said.