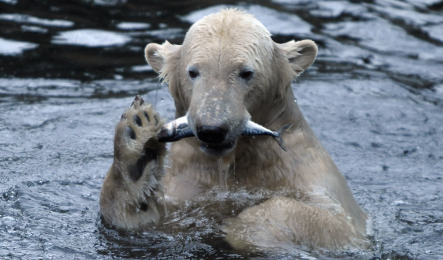 It’s unclear whether Knut will leave his home at the Berlin zoo next year or in 2010. He is owned by the Neumünster Zoo in Schleswig-Holstein, which will decide on Knut’s new home between Christmas and Easter. “Knut will spend Christmas Eve in Berlin, but I’m not so sure about Easter,” said Neumünster Zoo director Peter Drüwa.

He was the first polar bear to be born and mature in the Berlin zoo in more than thirty years, and came into the international spotlight after his mother abandoned him and his brother on a rock in their enclosure. Knut’s brother died shortly thereafter, little Knut survived and was raised by the late zoo keeper Thomas Dörflein.

Knut will celebrate his second birthday in the Berlin Zoo on December 5, but will not get the same toys and treats as last year. “We aren’t planning anything this time, it is a day like any other,” said Heiner Klös, zoo biologist and bear supervisor. “We want normalcy,” Klös said.

Knut appears to have coped well with the surprising death of his caretaker Thomas Dörflein on September 22. “Knut cannot mourn, and he does not look for Dörflein anymore,” Klös said. If Knut were to move to a zoo where he can encounter a female polar bear, it would fulfill one of Dörflein’s hopes: “I wish for Knut to go to a nice zoo outside of Berlin, where he can interact with other of his own kind and perhaps father children. He should lose the close connection with humans and be a polar bear,” Dörflein had said in a DPA interview before his death.

Whether Neumünster is due a share in the more than €5 million profit from Knut-based souvenir and ticket sales will be decided in May. “The court must decide that; it is totally independent of the decision about Knut’s new home,” Drüwa said. The decision will follow a controversy which began last summer over whether Neumünster has a claim to the bear’s proceeds.