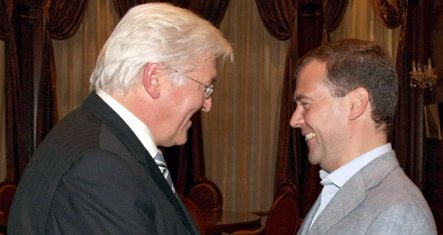 “We can better influence Russia’s development with an active foreign policy rather than with debates about containment and sanctions,” Steinmeier told the Handelsblatt business newspaper.

But Steinmeier, seen here as a leading advocate of partnership with Russia, also said the West should not renounce its principles in dealing with Moscow.

“A confident democracy like ours must not live in fear of having to compromise on values when engaging in political deals with partners who do not meet the standards of our western European democracies,” he said.

He also suggested German industry could benefit from Russia’s need to modernize its energy sector. And he welcomed the prospect of a new start in US-Russian relations.

As of next year, “we shall have two presidents whose thinking is no longer shaped by the Cold War,” he said speaking of US president-elect Barack Obama and Russian President Dmitry Medvedev.

He also welcomed the discussions on a new security treaty in Europe which are due to start later this week in Helskinki between foreign ministers of the Organisation for Security and Cooperation in Europe (OSCE).

Russia has called for a new, legally binding security pact in Europe to replace what it says are outdated arms control treaties from the Cold War and to deal with crises such as the brief war in Georgia in August.

On bids by Georgia and Ukraine to join NATO, Steinmeier stressed that while both countries must be offered the prospect of membership, the time was not ripe for change.

“At the present stage, I can see no reason to move away from the decisions” taken at the Bucharest NATO summit in April, he said.

Georgia and Ukraine have been promised membership but only after a number of conditions have been met. Both countries had hoped to win fast-track inclusion into the Membership Action Plan (MAP), a stepping stone to full NATO membership, at a foreign ministers’ meeting in Brussels this week.

But US Secretary of State Condoleezza Rice has already acknowledged that such plans are off the table for the moment.