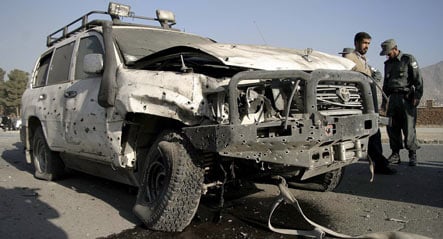 Deputy Kabul police chief General Alishah Ahmadzai had said the target was the vehicle of the German military attache but he was unharmed.

“The sole occupant of the vehicle, an Afghan employee of the embassy, was injured,” the German foreign ministry spokesman said.

“It was a suicide attack against the vehicle of the German military attache,” Ahmadzai said. “Two civilians are killed and three are wounded. The military attache is sound and safe. The attacker was on foot.”

There was no immediate claim of responsibility for the suicide blast, the second in the city in three days, but similar attacks have been claimed by Taliban-led extremists waging an insurgency in Afghanistan.

One of the dead was a municipal worker who was cleaning the road when the attacker struck, a worker named Waheedullah said.

“I was standing here at the corner when I heard a big explosion,” he said.

“I went to the main road and saw one of our friends lying on the roadside, covered in blood, near his wheel barrow. His belly was badly wounded and was open. I saw another civilian dead nearby and I saw two civilians wounded.”

The attacker’s remains were still at the scene after the attack, along with a damaged armoured diplomatic vehicle.

The interior ministry had initially said the attack, in front of a high school and near parliament, targeted a convoy of international troops.

But the International Security Assistance Force said it had not been a target in the incident.

The latest suicide attack to hit Kabul came after a car bomb exploded outside the heavily barricaded US embassy Thursday, killing four Afghan civilians and wounding nearly 20. The Taliban claimed responsibility for that attack.

The Afghan capital has suffered a rash of attacks this year, fuelling fears that a Taliban-led insurgency which has mostly affected the south and east of the country is encroaching on Kabul.

But Chancellor Merkel on Sunday reiterated her government was against a withdrawal of German soldiers from Afghanistan, saying that such a move would only boost forces keen on destabilizing the country.

“We want Afghanistan to be able to defend itself, that it has a stable government and that its own security forces can protect the country,” the chancellor told the Frankfurter Allgemeine Sonntagszeitung in an interview published Sunday.

“When we’ve achieved that then Afghanistan won’t need our soldiers anymore.”

“A debate over a possible withdrawal [of German troops] would play directly into the hands of those powers that aim to destabilise Afghanistan.”

At the same time, Merkel reiterated her opposition to increasing the German troop contingent. Germany currently has 4,500 soldiers stationed in Afghanistan, as part of a NATO force of around 60,000, of which about half are American.

Opposition to German involvement in the war in Afghanistan runs high in Germany. At least 30 German soldiers have been killed so far in seven years of fighting.

The chancellor said she looked forward to a change in the US presidency, since the future president Barack Obama would spur new discussions over the conflict in Afghanistan and on Pakistan’s role in the war.