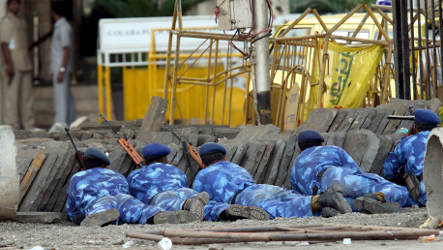 Police outside a hotel in Mumbai. Photo: DPA

Those rescued are in good health and are under the protection of the general consulate, a Foreign Ministry spokesperson said in Berlin on Friday. It is not yet clear whether they had been held as hostages by the terrorists, or if they had hidden in their hotel rooms during the attacks.

The ministry is also not sure if any other German citizens remain in the Oberoi Trident hotel, where terrorists killed some 125 and hold 200 hostages.

Islamist terrorists staged a series of 10 coordinated attacks in tourist favorite south Mumbai which killed more than 125 people on Thursday. The foreign ministry has set up a crisis team and sent psychologists to India’s commercial capital to counsel victims and their relatives.

A German national was killed trying to escape from the Taj Mahal hotel after an attack by Islamist terrorists, the foreign ministry confirmed on Thursday. The ministry said several other Germans have been injured in the attacks.

The ministry did not identify the man, but Munich-based production company C.A.M.P. TV said the victim was its co-owner, 51-year-old Ralph Burkei.

Burkei died after falling from an upper floor of the luxury hotel. He had been trying to escape from the building as it was raided by armed terrorists. He died on the way to the hospital.