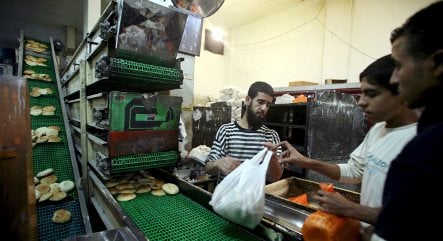 Palestinians wait for bread from the UN on November 17. Photo: DPA

The funds will be transferred to the United Relief and Works Agency for Palestinian refugees (UNRWA), Foreign Minister Frank-Walter Steinmeier said in a statement on Wednesday.

The United Nations appealed to its members earlier Wednesday to donate up to $462 million to pay for humanitarian projects in the Gaza strip.

The German foreign minister also warned that the conditions in the Palestinian territory were getting worse.

“The humanitarian situation in the Gaza strip has deteriorated in the past few weeks…the inhabitants must have access to basic commodities,” Steinmeier said in the statement.

He added that Israel “had the right to defend itself against Palestinian attacks,” but stressed any act of self-defence must be “proportionate.” Steinmeier also said Germany would increase its annual donation to the UN agency next year to €8 million, compared to €7 million donated in 2008.