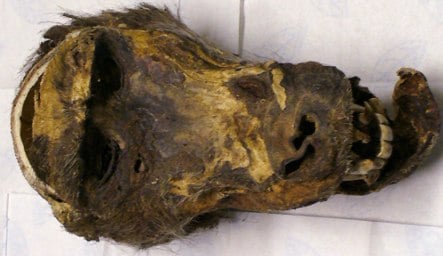 “We could smell it, and that was not something for sensitive noses,” Thomas Meister, the office’s spokesperson told The Local on Wednesday. “That’s why we opened it in the first place.”

The decaying skull was covered in live maggots when officials opened the package on Monday, he said. “They were crawling out of the package. Some officers had to leave the room and take a deep breath of fresh air outside because it was so bad,” Meister said.

The customs office is not sure which species the primate’s severed head belongs to, but Meister said it was “definitely protected.”

The gruesome discovery has been given to a specialised firm who will burn it. “Because of the degree of decay we have to make sure that everything that could endanger human health is destroyed,” Meister added.

Both the sender and the addressee of the package face legal action in the incident because primates are protected by the Convention on International Trade in Endangered Species of Wild Fauna and Flora. “They will be prosecuted, but it will be easier to get to the receiver,” Meister said. “And this person will face a fine of somewhere between a few hundred to a thousand euros.”

This isn’t the first bizarre find at the Munich customs office, though. “Last time we found a half-meter long crocodile skull that had been made into a lamp,” Meister said.