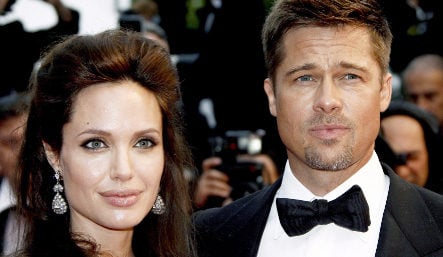 Jolie, currently living in Germany’s capital city with her family while partner Brad Pitt films at Babelsberg studios, was spotted taking notes and listening intently at the lecture on Russian-American relations on Monday night, the paper said.

The star was without security, but accompanied by her assistant and Lloyd Phillips, the executive producer for the Quentin Tarantino film “Inglorius Basterds” that Pitt is currently filming in the city.

The lecture, “Russia and the West – A Way Forward,” was given by Georgetown University head of the Center for Eurasian, Russian and East European Studies, Angela Stent.

The actress seemed relaxed and smiled often during the question and answer session of the lecture, Die Welt reported.

And what, the paper asks, does one wear to such an event? Because, as the paper said, “a little sex must be,” Jolie wore knee-high black boots, along with a black skirt and a black turtleneck that gave off an “academic affect.”

Jolie and Pitt arrived in September with plans to stay for about three months at a Wannsee villa called Palais Parkschloss – in the same area as the American Academy – according to reports in the German media.

The Academy Award winner is known to be politically active, and serves as a Goodwill Ambassador for the UN Refugee Agency.

The supposed script of “Inglorious Basterds” was leaked in mid-August and published on the internet. If the script is genuine, the film will feature Pitt as the leader of a band of American-Jewish soldiers sent behind enemy line during World War II to murder as many Nazis as they can in horrific ways.