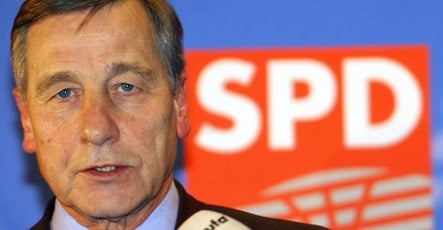 Clement, 68, said in statement on Tuesday that his leaving the party after 38 years was based on an SPD arbitration committee’s decision to reprimand him because of critical comments he made in January about party colleague Andrea Ypsilanti. She was in a tough race in the state of Hessen, but Clement indirectly called for people not to vote for her citing his disagreement with her – and the SPD’s – energy policy.

Earlier this year, the party had decided to expel him, but reversed that decision. Still, Clement said even a reprimand went too far and infringed on his “basic right of freedom of opinion.“

The former journalist also said he did not agree with the direction the party was headed, particularly its possible cooperation with the Left Party, the successor party to East Germany’s communists. Clement said the SPD leadership had failed to distance itself from the far-left group, and “even encouraged cooperation with this party – in the states – even though its entanglement with the Stasi,” East Germany’s feared secret police, “is evident.”

Clement said the SPD’s economic policies were leading to the “de-industrialization” of Germany.

The resignation comes at a time of turmoil for the party. Internecine squabbling and an unfocused message, not to mention the upstart Left Party which has drained away support for its left-wing, have weakened the party considerably. The SPD is now gearing up to face Chancellor Angela Merkel in federal elections next fall. The party has nominated current Foreign Minister Frank-Walter Steinmeier to be her challenger.

Clement has long been reluctant to toe the party line and has been the centre of controversy before. From 2002 to 2005, he was Chancellor Gerhard Schröders economics and labor minister and charged with implementing the “Agenda 2010” labor and welfare reforms. They remain deeply unpopular, even among Social Democrats.

Clement left the government when Chancellor Merkel came to power in 2005 and took a job on the supervisory board of energy utility RWE. The company wants Germany to reverse its plan to phase out nuclear energy, a central pillar of SPD policy.

SPD Chairman Franz Müntefering said Tuesday he regretted Clement’s exit, calling it a “shame,” but saying it would not diminish his contributions to the Social Democratic ideal.

Chancellor Angela Merkel’s CDU called the decision a setback for the SPD leadership.

“It says a lot about the leadership and general health of the SPD when someone like Wolfgang Clement, who is a Social Democrat through and through, turns his back on his own party,” CDU General Secretary Ronald Pofalla said.