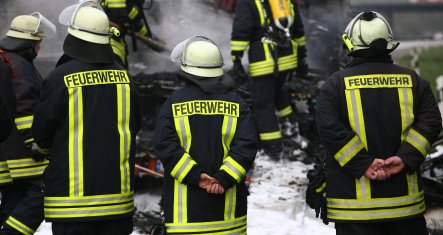 The “fire devil,” as the paper called him, faces murder and arson charges because he was willing to burn down his own flat in April – just to see his neighbours die in the flames.

The man, who is reportedly an alcoholic, was drunk when he lit paper and twigs in his apartment, then left the building with his television and remote control to watch the inferno, the paper reported.

“Huge black smoke clouds were coming out of the house door,” the man’s social worker told the court on Monday, adding that he had been on his way to check on him that day. “He sat on the television grinning and laughing. He said the building should burn and the neighbours should die along with it.”

The man, born in Austria, had apparently been involved in a feud with the neighbours, a married couple, for years, Express reported. “He often rampages when he’s drunk,” the woman neighbour told the court. “He’s already smashed in car windows.”

But the alleged arsonist refuted her claims, telling the court the couple had been responsible for his arrest 18 times.

The man’s arch enemies were not in the apartment when the man lit the fire and the fire department was able to quell the flames before the fire caused extensive damage to the building.

The man denied the charges before the county court, saying that he’d set fire wood to dry out in front of his wood-burning stove, and that it had accidentally caught fire.

But judge Udo Buhren said the man’s story is unlikely. “An unburned cigarette box was in the stove,” he told the paper.

The Reichshof court spokeswoman told The Local she was unable to comment on the case because court proceedings are ongoing, but laughed at the suggestion that the case was “absurd.”