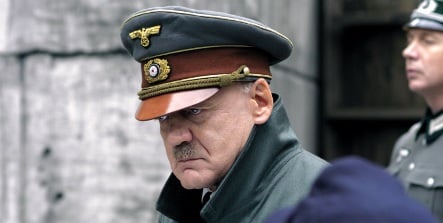 A remarkable range of topics have been chosen as alternative reasons for Hitler’s loss of temper to put over the scene where he explodes over a military defeat and rages at his commanders in the bunker.

The transfer of Cristiano Ronaldo had more than a million hits, with Hitler spouting brilliantly synced obscenities to match the actor’s passion.

“We did it thinking it would be viewed more than a dozen or so times,” The Times quotes darlysblog, a composite name of eight football fans who posted it, as saying. “In fact the success of the first one still leaves us shaking our heads in shock. The humour is base, coarse and offensive. Apparently that is what appeals.”

Other scenarios imposed on Ganz’s performance via subtitles include Hitler losing his temper because he cannot get Windows Vista or his Wii game console to work, or that he has been banned from various internet services for using obscene language.

There are very recent news events too. One mash-up takes on the British story about membership details of the fascist party BNP having been made public.

Hitler is told his name, address and membership has been leaked and rants about how incompetent the leadership has been for allowing such a thing to happen, promising personal physical revenge.

“What hope is there for us angry losers of this world when we can’t even turn to the BNP?” he moans. “The neighbours are going to find out aren’t they?” he concludes. “They’ll think I’m a Nazi or something.”

The viral spread of the scene mash-ups has even been parodied itself, with one portraying Hitler raging about the impertinence of making fun of the film, and another where he simply pleads for it to stop.