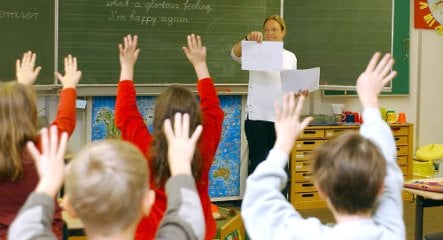 About 60 percent of German pupils are now taking English as a foreign language, up from just under 20 percent in 2002, according to a study released Friday by Eurydice, the European Commission’s education network. The report also confirmed that English is the most-studied language on the continent.

The study coincided with a meeting of European education ministers that focused in part on boosting multilingualism within the European Union. The ministers agreed on a 30-point action plan for getting more European youngsters to learn a new tongue.

The ministers said they would focus on training more language teachers while promoting teacher exchanges between EU-member states. The politicians also hope to promote the use of subtitles in films – rather than dubbing – as well as pushing for more translations of literary and other cultural goods to boost understanding between countries.

Although the EU has 27 member states, it has 23 official languages and 3 different alphabets.

“Multilingualism is an issue for all of European society. It starts in school and goes much further, as we need to master an increasing number of languages to foster social cohesion and prosperity,” European Commissioner for Multilingualism Leonard Orban said in a statement.

German students are required to start learning English at the age of about 9, and can begin taking a third language later in their educational career. In comparison, students in Ireland and Scotland aren’t required to take a foreign language at all, according to Eurydice.

But the agency noted that most pupils in those areas learn a second language anyway. It didn’t count Irish or other rare and local tongues such as Welsh as a foreign language.

The study also showed that kids are learning languages at an earlier age. Children in Spain will begin learning a second language at the age of three beginning in 2009, while pupils in Portugal can begin taking English at the age of six.

After English, German and French are the two most popular foreign languages chosen by European students.