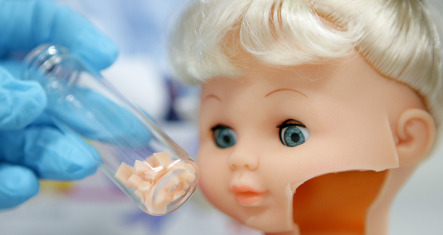 No parent wants their child to find a nasty little health risk under the Christmas tree, so ÖKO-TEST put a veritable Toyland of dolls, puppets, building blocks, stuffed animals, toy cars and action figures through their paces to ensure that holiday fun stays wholesome this year.

The results of the test, which checked for harmful chemicals and safety defects, were a catastrophe, the magazine reported. Almost half of the 68 toys from 10 different product categories manufactured around the world didn’t pass the basic test – mainly because of toxic contamination. Meanwhile five products should never have been on store shelves in the first place.

“We notice that year by year our tests change buying behaviour, but there are enough people who purchase contaminated toys that manufacturers still provide the shops with low quality products,” Jürgen Stellpflug, editor in chief of ÖKO-TEST, told The Local.

“Despite the existing regulations about toy safety we found two dolls that could put children in danger of strangling or choking on small parts,” Stellpflug added, referring to the “Bratz Play Sportz Yasmin Fitness” doll and the “Simba Dolly My Rag Doll” – which both contained harmful substances as well.

Some of the toxins found in the toys at an alarmingly high concentration are known to damage the liver, kidneys, reproductive system and even cause cancer. “There is no need for discussions about whether those chemicals could be dangerous or not. They simply are,” Stellpflug said, adding that while some of the substances can be absorbed through the skin and even inhaled, the biggest risks occur when children put toys in their mouths.

Testers did manage to find 20 of the 68 tested toys they could recommend, most of which were higher quality wooden playthings. “The chance to get better quality for your money increases with how much you spend,” Stellpflug advised.

Parents can decrease the likelihood of buying contaminated toys by testing toys themselves, he said. Though many dangerous chemicals found in toys are totally odourless, a little “smelling-test” can’t hurt when buying gifts for the little elves this year.

Ultimately, safety regulations for toy manufacturers need more regulation, he concluded. “This is an issue the legislator has to address,” he said. “Even cosmetics would be rated better than some toys.”