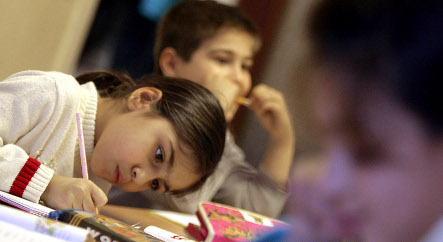 “This study shows once again that students with an immigration background are on average noticeably behind their German classmates,” Schäuble told daily Bild, calling for more remedial lessons, more teachers and tailored training for future teachers.

“And parents with immigration background need to entrust their children to our kindergartens,” he said, referring to a hesitancy among the immigrant population to send their young children into the school system.

Some 57,000 German 15-year-olds took part in the standardised Programme for International Student Assessment (PISA) test in 2006 to give authorities a glimpse into their academic capabilities.

Germany’s best ranked states had some of Europe’s highest results, but Germany still faces significant challenges because of wide performance gaps between the country’s states.

The former East German state of Saxony trounced the rest of the country in the standardized test results, joined by Bavaria and neighbouring Thuringia in producing the country’s best pupils. Saxony came out ahead in all three disciplines. The 2006 test focused on science, with more than half of the questions in the fields of physics, chemistry, biology and geology. One-fourth of the test focused on reading and maths.

The first PISA test was conducted in 2000 and Germany’s disappointing results put school policy under the spotlight.