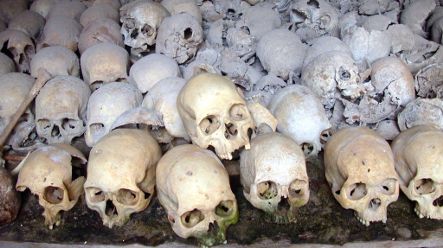 Large processions were converging towards the German embassy and the local offices of Germany’s overseas broadcaster Deutsche Welle.

“We condemn France and Germany,” read some of the banners waved by the demonstrators. Others called for the immediate release of President Paul Kagame’s chief of protocol Rose Kabuye.

Kabuye was detained in Frankfurt on November 9 on a warrant issued by a French anti-terrorism judge probing the role of Kagame’s entourage in the 1994 crash of a plane carrying then president Juvenal Habyarimana.

The Hutu president’s death is widely believed to have sparked the genocide by Hutu militias of the country’s Tutsi minority.

Kabuye was due to be transferred to France later on Wednesday. Kagame’s Tutsi regime has denounced Kabuye’s arrest, accusing France of persecuting the genocide’s survivors instead of hunting its perpetrators, some of whom are believed to be living in Europe.

Rwanda has also accused France of actively supporting Hutu militias during the genocide and has threatened to issue warrants and indictments of its own against top French military and political officials.