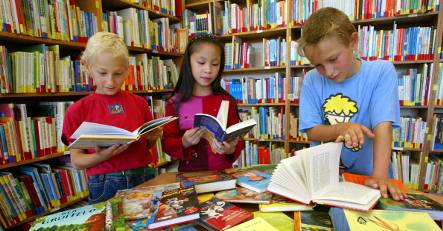 “Many parents think of themselves as reading-aloud parents, but in practice they are not,” Dr. Rainer Esser of Die Zeit said while presenting the study in Berlin. He also noted that “income and education level play almost no role in parents’ reading-aloud behaviour.”

The study, Vorlesen im Kinderalltag 2008, or “Reading aloud in children’s daily life,” surveyed 875 children between the ages of four and 11. Of the 37 percent who said they were never read to, 22 percent said that they wished their parents would actually read to them.

Ralf Klein-Bölting, chief marketing representative for Deutsche Bahn, said at the introduction that there was a “marked difference in perception” between children and parents. Last year 1,000 parents were surveyed, with 42 percent saying that they read only irregularly to their children and 18 percent admitting they did not read to them at all.

The study also revealed that mothers read to their children more than fathers. While 64 percent of children said their mothers read aloud to them, only 8 percent reported being read to by their fathers. “Fathers who read aloud are urgently sought,” Klein-Bölting said, adding that they “are important role models for the difficult-to-reach boy target audience.”

“Children who are never read to are at a massive disadvantage when it comes to acquiring language and concentration abilities,” said Klein-Bölting.