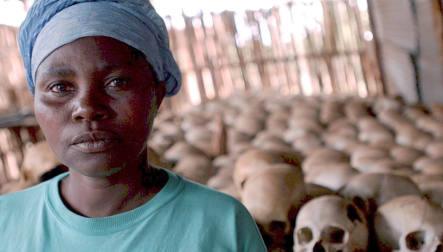 A file photo of a survivor of the Rwandan genocide. Photo: DPA

He told Financial Times the allegations against Rose Kabuye, his chief of protocol who was arrested in Frankfurt on November 9 on a French warrant, were “baseless”, and rejected the principle that allowed such an arrest.

Kabuye was arrested over her suspected involvement in the assassination of former Rwandan president Juvenal Habyarimana in 1994, and will be transferred into French custody on Wednesday.

The incident became the catalyst for the Rwandan genocide that started a few days later and left at least 800,000 Tutsi and moderate Hutu Rwandans dead, according to the United Nations.

“You don’t just give one country jurisdiction over another country, in particular if that country has actually been involved in the case. It is madness,” he told the business daily.

“It’s offensive in a sense that it is Africans who are perpetually the offenders, the criminals, and the others who are their judges.”

Arresting Kabuye has caused a diplomatic furore, being condemned by African organisations and greeted by street protests in the Rwandan capital Kigali.

Kagame’s government has accused France of having actively supported the genocide perpetrators and said Rwandan courts were poised to issue arrest warrants against 23 French military and political officials over their role.