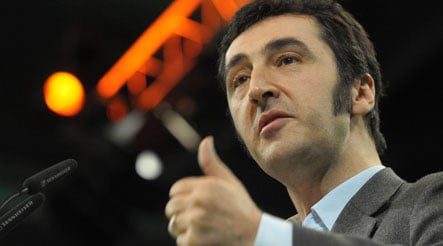 Özdemir, 42, was elected with almost 80 percent of the vote. He was born to Turkish immigrants in the southwest of Germany and took German nationality in 1992.

In 1994 he became the first politician of Turkish origin to be elected to the German parliament, the Bundestag, where he served until 2002.

“I believe I’m as Turkish as I am German,” Özdemir said on Saturday.

He was chosen to replace Reinhard Bütikofer, who retires after six years at the head of the party as co-leader, at the party’s annual congress in Erfurt in eastern Germany.

Claudia Roth, who already occupies the other post traditionally split along gender lines, was voted back in with more than 82 percent of the vote.

The Greens, who hold 51 of the Bundestag’s 612 seats, were coalition partners with the Social Democrats between 1998 and 2005 but are now the smallest opposition party.