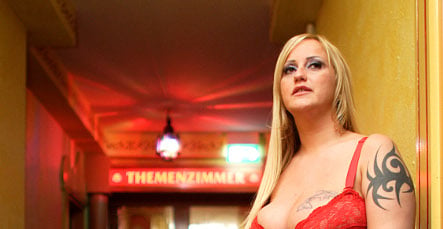 Armin Lobscheid, the manager at one of the city’s most famous brothels “Pascha,” told the paper he didn’t think anyone would take him up on the offer he put up in the hallway of the 11-story hotel and club that offers a money back guarantee for a myriad of services. But Express reported he “learned his lesson” on Wednesday about how far a thrifty john is willing to go. Dozens of men formed a line that night for their “Pascha” tattoo.

One die-hard customer, 46-year-old Herbert Manske, told the paper he didn’t hesitate long to get the six large blue letters tattooed on his arm. “My wife doesn’t mind. I save five euros entry, plus the thirty euro cost of a lap dance,” he said. “And apart from that I get free drinks all night and can look at all the pretty girls. She knows that me and my friends go once a month to party in the Pascha.”

Karl-Heinz Daheim, 46, and Peter Schneider, 63, also opted to go for the money-saving deal at the Puff, the German word for brothel.

“You have to do something crazy in life at least once,” Daheim told the paper.

Kerry, the tattoo artist in the deal has some “long nights ahead,” the paper reported. He needs 90 minutes for each session.