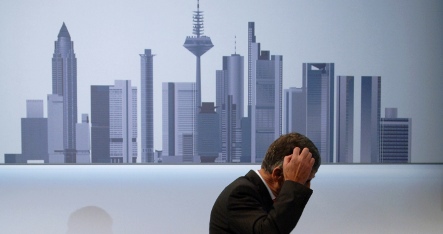 One of my wisest decisions at school was never to take mathematics seriously. The latest financial crisis has proved me right yet again. The United States recently announced a $700 billion rescue plan for its banks. Why $700 billion? Why not, say $480 billion? Or $720 billion? A US Treasury spokeswoman confirmed my suspicions when she admitted: “We just wanted a really big number.”

Well, that’s the kind of maths I understand.

The same goes for Bavaria’s Hypo Real Estate, or hypno-bank as I prefer to call it. The government agrees to a rescue package of €50 billion, but now it’s first in line for another €15 billion assistance and says it actually needs much more. Meanwhile I am having problems getting my German bank to lend me a few thousand euros to pay a tax bill. The numbers business has gone mad.

Even the Financial Times – the Bible or perhaps the Kama Sutra of the banking world – seems to have been taken by surprise by this hole mess. Its quaintly named magazine “How to Spend It” was dedicated to advising bankers how to burn their fat bonuses. One suggestion – I kid you not – was a belt that automatically tightens or expands depending on whether you have eaten goulash and dumplings or have fasted for a day. It is called the Dunhill Mechanical belt and can be bought for only ₤5,962.

Ten days later, the same newspaper’s Agony Aunt was asked by a banker whether he should lie about his profession at dinner parties. He was tired of being insulted or ignored. One answer was: pretend you’re an unpublished novelist.

Especially in Germany these days, bankers have become pariahs. Ordinary people have become spooked by the numbers. If you get your maths wrong in the classroom, you are punished. If you get your figures wrong in real life, you are helped out with money that comes from the taxes of people who actually pay attention to their bills. The bailouts help only creditors not debtors. That is, the banks, but not homeowners or companies. It takes two to create debt, but only one side is being helped. So, naturally people are angry with bankers.

Björk, the strange Icelandic pop singer, said the other day that the bankers on her island have gone into hiding. It’s not quite that bad in Berlin’s posh Grunewald district. Sometimes you see someone with a brown paper bag over his head climbing into a Mercedes C-Klasse and you think: Dresdner! Or: Commerzbank! But it doesn’t happen very often. Usually nowadays they take the S-Bahn. The S7 from Nikolassee – even in the old days this used to be known as the Bankierbahn – in varying degrees of camouflage. The other day I even saw one with a surf board. In November.

The real problems will start in May when – okay if – Peter Sodann gets elected president of Germany. The actor who used to play a cop on TV is the hopelessly doomed candidate of the hard-line socialist Left party and he’s said he’d like to arrest a few of Germany’s top bankers.

But if there were a popular vote for Germany’s ceremonial head of state, he might well have won. Look at it this way: a Tatort commissioner watched by millions on Sunday nights backed by an anti-banker party against the incumbent Horst Köhler, who made his name at the International Monetary Fund wining and dining bankers. Sadly, German presidential elections do not operate in this way, meaning Sodann won’t be personally putting handcuffs onto the wrists of bankers next to their silver Rolexes any time soon.

And before it gets to that stage I would like to say: stop this hate campaign now! Do not marginalise the banking profession! Everyone deserves a second chance and there is no reason whatsoever that a banker cannot be useful to society. Prison, Herr Sodann, is not the answer for these often misunderstood people.

Current estimates are that there will be 250,000 people unemployed from the European banking sector by this time next year. A quarter of a million: at a time when more and more households need childcare, sensibly priced cleaners, and healthcare workers. Give these men – I’m afraid most of them are men – new opportunities. They can be trained to change the sheets underneath elderly Auntie Elfriede or scrub those difficult-to-reach windows.

Got a problem with some mould down in the basement? Call a out-of-work banker. Just make sure he doesn’t fiddle with little Leon’s piggy bank. And make sure he pays his taxes. There’s too much taxdoging going on in Germany as is.