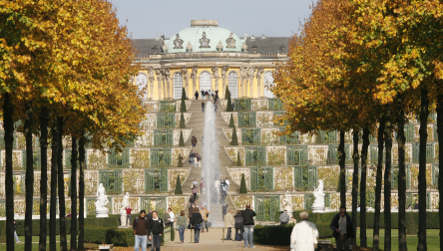 With its “well managed and delightful” preservation of both landscape and structure, the former seat of Prussian kings was ranked among 110 other historical destinations, which included Wachau in the Danube valley and the Benedictine Melk Abbey.

Just a short jaunt from Berlin, the city boasts a series of interconnected lakes and unique cultural landscapes, in particular the parks and rococo palaces of Sanssouci, the largest World Heritage Site in Germany. Sanssouci, which translates as “carefree,” is said to be Germany’s smaller rival to French palace Versailles. The well-preserved summer residence of Frederick the Great, King of Prussia, is such a popular destination for locals and tourists alike that management requires visitors to make appointments for tours.

The National Geographic study focused on “how well historic destinations are withstanding mass tourism, neglect, and wrecking balls—as well as the more subtle threat of overplaying the past, where a place ends up embalmed as a lifeless museum or Disneyfied into a cute parody of its true heritage.” Potsdam, in particular, fulfilled the survey’s requirement for a “homegrown sense of stewardship,” and was honoured for its ongoing reconstruction after years of neglect as part of formerly communist East Germany.

“The imprint of Soviet life is rapidly disappearing and excellent restoration work is succeeding it; Potsdam is assuming its deserved place as one of Germany’s most important cultural centers,” found one of the 280 experts included on the panel for the study conducted by the Society’s Center for Sustainable Destinations. Adding that, “Potsdam is well on its way to a sustainable future.”

Meanwhile the city is home to the Babelsberg film studios, which has become increasingly popular with Hollywood figures like Tom Cruise and Quentin Tarantino.

The hit list – with other criteria such as environmental and ecological quality, social and cultural integrity, condition of historic buildings and archaeological sites, aesthetic appeal, quality of tourism management, and outlook for the future – featured other low-key communities like Potsdam that don’t necessarily fit in as mass tourism hot spots.

Among the list’s other European destinations, three other German cities – Munich, Dresden and Aachen – made the grade for their work to reconstruct historical sites destroyed in the Second World War.

Bavaria’s capital Munich came in 30th for the “many historical sites that have been reconstructed meticulously to their original grandeur as well as the English Gardens and the numerous suburban parks which were stated the centrepiece of Munich’s culture and quality of life.”

Dresden, the capital of Saxony, was both praised and criticized by the magazine’s panel of judges, who acknowledged the “effort that has been made in reconstructing cultural buildings in the historic core that were destroyed by bombing in WWII like the famous Frauenkirche.” On the other hand, judges found that the 38th place city had problems which typified an attempt to mix old architecture with modern buildings. “Dresden is in danger of losing so much for short term gain,” one judge said.

Aachen, in state of North Rhine-Westphalia ranked 44th for its “stunning historical aura,” embodied by the impressive cathedral in the city’s centre and for successfully balancing its role as a tourist destination with daily life.