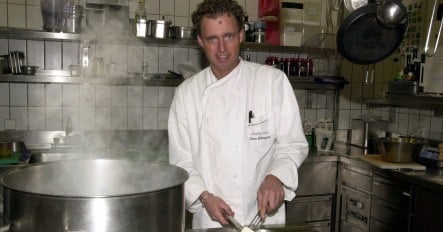 The 2009 guide for German gourmet restaurants released this week awarded three stars to Elverfeld for his work at the Aqua restaurant in Wolfsburg in Lower Saxony.

“The phone call came at 10:57 — at first I was in shock,” the young chef said. Listed with two stars in last year’s guide, Elverfeld is now one of nine chefs in Germany with three stars, replacing former three-star Bavarian chef Heinz Winkler. Winkler has been given two stars in this year’s guide.

Originating in France in the early 20th century, the red “Michelin Guide” rates exceptional restaurants in more than a dozen countries with one to three stars, using the three-star rating sparingly. After France, Germany is home to the most three-star restaurants worldwide.

Elverfeld’s new status is part of a generational trend in top-tier chefs in Germany. The majority of three-star chefs are between 35 and 40 years old. Elverfeld falls into this age bracket, along with three-star German cooks Klaus Erfort from Saarbrücken, Juan Amador from Langen in the Hessen region, Nils Henkel and Christian Bau from Perl in the Saarland region. At 59, Winkler was until this year Germany’s oldest three-star chef.

Elverfeld’s cuisine has become more experimental in the last few years. The Wolfsburg chef was trained as a confectioner before he gathered experience in Japan, Dubai and under the tutelage of Dieter Müller. He then applied to the US hotel chain “Ritz Carlton” for the Wolfsburg position. “I stood here eight years ago in the bare brickwork,” Everfeld said as he gazed at the imposing Volkswagen plant across from the hotel restaurant.

At first the young chef relied heavily on the renowned style of Dieter Müller for his appetizers, but more recently he has developed his own individual style, which Michelin editor-in-chief Susanne Caspar said has brought him the third star.

Elverfeld calls his new interpretations of everyday dishes “a new European cuisine.” His “Knusparillos” consist of sweet and savory Bismarck Herring in pumpernickel brittle or a pencil-thin “Toast Hawaii.” His surprising creations, such as cod with mixed pickles and popcorn-shaped roasted potatoes, often come to him on vacation or on the weekend, when he first tries them out “in my head.”

But the basis of Elverfeld’s creations remains classic European cuisine. He dislikes the concept of “molecular gastronomy,” which uses scientific concepts to change the properties of food while cooking.

“Many young people who think that molecular gastronomy is hip forget the basis, and it just doesn’t taste good,” Elverfeld said.