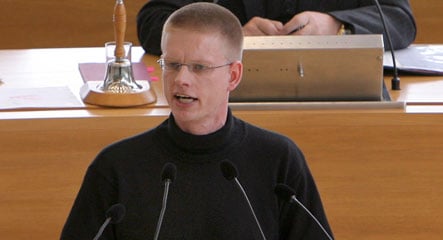 Neo-Nazi Jürgen Gansel got socked in the face. Photo: DPA

An argument between Jürgen Gansel and Peter Naumann – both members of the National Democratic Party of Germany (NPD) – escalated into a fist fight, during which Gansel was punched in the face.

The brawl took place on Tuesday in the NPD’s corridor in Saxony’s parliament building in Dresden.

Relations between the two have been strained for some time, the spokesman said, confirming an earlier report in the Leipziger Volkszeitung. Gansel raised hackles recently when he described Barack Obama’s US election victory as the product of “the American alliance of Jews and Negroes” in a statement entitled “Africa Conquers the White House.”

Authorities in Dresden are now investigating whether he can be charged for inciting racial hatred as a result of the remarks. Naumann served time in jail at the end of the 1980s for blowing up television masts in an attempt to stop a documentary about the Holocaust.

The NPD, which campaigns on an anti-immigrant, anti-Semitic platform, holds seats in two eastern German states but has never cleared the five-percent hurdle needed for representation in the national parliament, the Bundestag.