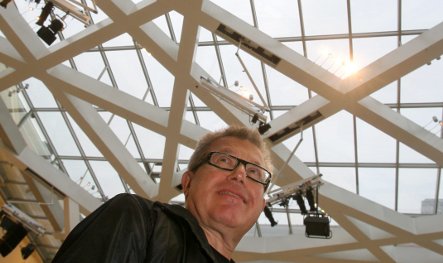 Daniel Libeskind inside the Jewish Museum in Berlin. Photo: DPA

“I am thrilled to have the opportunity to work on the development of a Reform Synagogue in Munich, Germany,” Libeskind, who also built Berlin’s Jewish Museum, told The Local via email on Wednesday. “A project with such exciting aspirations and profound beliefs is one I whole-heartedly support.”

The project for the Beth Shalom (House of Peace) for the city’s liberal Jewish population is still in the preliminary stage – the community is searching for donations and Libeskind will not present plans until spring of 2009. But Munich Jewish leaders said that it could be built on the site of the city’s first synagogue on Westenriederstrasse, which was destroyed by Nazis in 1938 in the Kristallnacht pogrom, or the Night of Broken Glass. The building will not likely be finished until 2018, news agency AFP reported.

Libeskind, who is of Polish-Jewish descent, has completed three European Jewish museums in Berlin, Osnabrück, and Copenhagen. While each of these was “built in the shadows of the darkness of the Holocaust,” Libeskind told The Local that he tried to use light to convey a sense of hope for “humanity’s light” to shine through.

In the last several years, Germany has experienced a revival of Jewish culture with new synagogues, community centres and museums opening across the country. According to the German Jewish Council, some 250,000 Jews live in the country, 104,000 of whom are registered religious community members.

Beth Shalom is a member of the World Union for Progressive Judaism, which says it largest Jewish religious organisation in the world with 1.5 million members in some 40 countries.