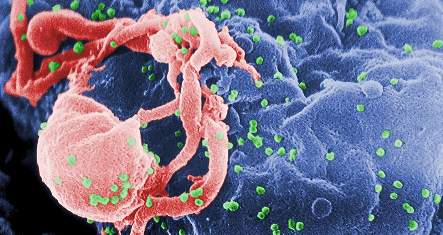 A picture of HIV budding from a blood cell. Photo: Centre for Disease Control

For two years now, Dr. Gero Hütter has found no trace of the virus in the 42-year-old American living Berlin, whom he has treated for leukemia at the city’s Charité hospital. The man is AIDS-free despite the fact that he stopped taking his medication for AIDS after the treatment, the paper reported, calling the development a “sensation.”

Hütter gave him a bone marrow transplant – a standard leukemia treatment – but with a twist. The doctor used bone marrow with a natural variant of the CCR5 gene, known since the 1990’s to protect about one percent of Europeans from AIDS infection.

Though Hütter is not an AIDS specialist, he discussed the CCR5 possibilities with colleagues, who helped him test some 80 possible bone marrow donors before finding one who had inherited the protective variant of CCR5 from both parents. The patient was not only cured of leukemia, but was also later found to be “functionally healed” of his AIDS infection after a bone marrow transplant from the donor, Die Welt reported.

International experts agree that the case may be just a lucky singular incident – because bone marrow transplants often aren’t successful and in many cases there are no CCR5 variant donors available.

While the news of a possible AIDS cure is exciting, until the results of the patient’s treatment are published in a medical journal, experts won’t be able to officially discuss possibilities and limitations for further developments, the paper reported.