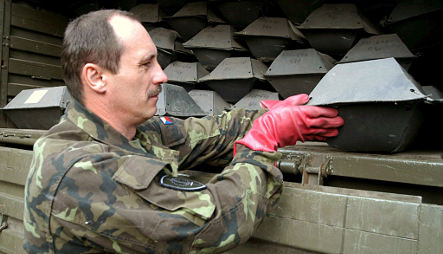 A file photo of German soldier remains in the Czech Republic. Photo: DPA

Fritz Kirchmeier, spokesman for the Volksbund Deutsche Kriegsgraberfursorge (VDK) association, said 330 soldiers would be buried on Wednesday in the cemetery in the western town of Cheb.

The rest, including 450 civilians, would follow over the next two or three weeks, he added.

VDK, in charge of about two million German graves from the two world wars in 830 cemeteries throughout Europe, found the bodies at sites across the Czech Republic.

“Maybe we will find more soldiers in the Czech Republic,” Kirchmeier told AFP, adding that ultimately up to 7,000 soldiers may be buried in the Cheb cemetery, which is still largely unfinished.

“Next year, we want to build the paths and fences and a cross and we want to put the names on the stones,” Kirchmeier said, adding that the cemetery would be inaugurated in 2010.

The Czech Republic was one of the last battlegrounds in World War II, with Prague the last major city to be liberated.

Liberation, however, brought reprisals against German soldiers and up to an estimated three million German-speaking civilians who had lived in the former Czechoslovakia.

In Cheb, unknown soldiers will lie side by side with those whose names the association has retrieved.

“We know about 1,350 names and up to now we have found about 300 families – the relatives of these dead people,” Kirchmeier said.

A ceremony will be held Wednesday attended by some 20 officials, while the relatives will be invited at a later date.

“The German side is in charge of the project, and they are also paying all costs,” said Martina Kuzelova, spokeswoman for the town of Cheb.