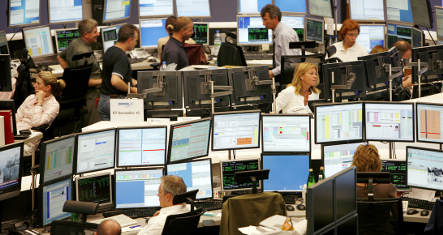 A file photo of stock traders in Frankfurt. Photo: DPA

But two days before the government was expected to confirm that the world’s top exporter is in recession, experts warned that the country’s prospects were still far from bright.

The ZEW economic research institute said its investor sentiment index had risen to minus 53.5 points this month from minus 63.0 points in October, up from a record low of minus 63.9 in July.

The result was better than expected. Economists polled by Dow Jones Newswires had forecast a result of minus 58.5 points.

“The earlier pessimistic expectations of the financial market experts are confirmed by the current economic development in Germany. The experts, however, seem hopeful that the collective actions of governments and central banks will mitigate the economic slowdown,” a statement quoted ZEW president Wolfgang Franz as saying.

Since financial markets were plunged into turmoil following the collapse of US investment bank Lehman Brothers, central banks around the world have sharply reduced interest rates in a bid to stimulate economic activity.

Major central banks including the US Federal Reserve, the European Central Bank (ECB) and the Bank of England (BOE) cut rates simultaneously by 0.5 percent in a co-ordinated move on October 8.

The ECB cut interest rates by a further 0.5 percent to 3.25 percent last Thursday, while on the same day, the Bank of England slashed its rate by a further record 1.5 percent, to three percent.

Leaders of the G20, which includes the seven leading economies and key developing ones, will meet Saturday in Washington to discuss the way forward to ensure that the worst financial crisis since the Great Depression is not repeated.

But although the ZEW indicator was better than had been expected, analysts warned that the prospects for Germany’s economy remained gloomy.

Unicredit economist Alexander Koch said the index is still at “clearly recessionary levels, with no sign of bottoming out.”

“There is no doubt about it: The German economy is sliding into a recession,” Koch warned.

Berlin recently cut its forecast for economic growth in Germany to a mere 0.2 percent in 2009, as the crisis takes its toll on economies around the world.

The government will publish figures on Thursday for economic growth in the third quarter of the year and if growth contracted for the second three-month-period running, as widely expected, the biggest European economy will be officially in recession.

Five leading economic institutes – known as the “wise men” – will also release updated projections for growth in Germany on Wednesday. According to press reports over the weekend, they are expected to say the economy will register no growth at all in 2009.

Capital Economics economist Jennifer McKeown noted that the ZEW index was still at a “very low level” and warned, “far more investors expect the German economy to weaken further over the next six months than think that conditions will improve.”

For her part, McKeown predicted that the Germany economy would fall by 0.5 percent next year.