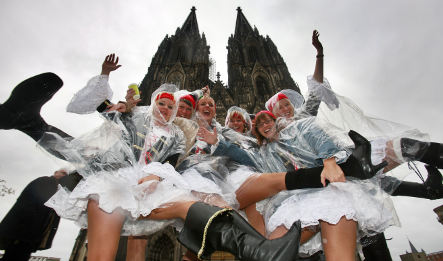 Each year Karneval time, or the “fifth season” opens on the eleventh day of the eleventh month at 11:11 am – but only for one day. Then the festival, based in Catholic traditions, is suspended through Advent and Christmas until the New Year when the Jecken, or jesters, hit the streets for several days of alcohol-fuelled celebration beginning on the Thursday before Lent.

Cologne is famous for its local beer Kölsch, which is served in tall, thin glasses and is vigorously consumed during Karneval.

Click here for a photo gallery of the Jecken.

This year’s Karneval motto is “Unser Fastelovend himmlisch jeck,” or “Our festival of heavenly jest,” in Cologne dialect. Drunken jesters will join three costumed figures – the prince, the virgin, and the farmer – who pay handsomely to represent the carnival and lead parades.

Several other Rhineland cities, including Düsseldorf and Bonn, also celebrate the beginning of Karneval with their own brand of traditional partying and costumed figures.