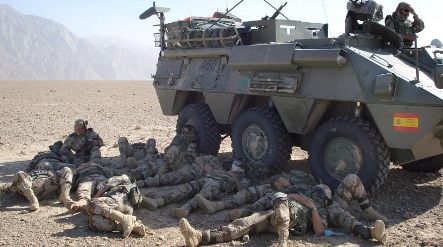 She told a security conference in Berlin on Monday that NATO, on the eve of its 60th anniversary next April, needed to take a broader approach to security that did not view military and civilian cooperation, such as in Afghanistan, at odds.

“I consider it necessary to commission a new strategic concept” at an anniversary summit on the Franco-German border in April, she said.

Merkel said the alliance needed to “see its role as a guarantor of our collective security” in a more comprehensive way, and noted that the April gathering would be NATO’s first with Obama, offering a chance at a “true transatlantic partnership” to deal with 21st century threats.

“We will approach this in the spirit of cooperation… knowing that no country can solve the problems of the world alone any longer,” she said. “We are looking ahead to our future cooperation with great openness, great expectations and great seriousness.”

Merkel said NATO had developed its security strategy before international terrorism had reshaped the challenges facing the alliance, and now needed an “interlinked security policy” bringing together more than troop deployments.

The German leader said NATO’s International Security Assistance Force (ISAF) in Afghanistan was a clear example of the gains that could be made in security by developing civilian infrastructure as well as fighting militants.

But she sharply rejected calls in Germany to set a time limit on the deployment of its troops in the country, saying they should stay until Afghanistan “can stand on its own two feet.”

Merkel said NATO must also ask itself “how it can get involved in arms control and disarmament in an even more determined way,” calling its efforts to date “unsatisfactory.”

And she said the new NATO strategy must aim for “close and reliable” cooperation with Russia, as well as better coordination between NATO and European Union security policy.

NATO secretary general Jaap de Hoop Scheffer also addressed the conference, and underscored Merkel’s point that NATO must not see military defence and infrastructure development as mutually exclusive, nor force member countries to decide between their commitments to NATO and EU defence efforts.

“These choices are misleading choices,” he said. “We cannot and ought not sacrifice one for the other.”

Merkel and Scheffer were speaking at a conference convened by the Atlantic Treaty Association, a non-governmental organisation that promotes public support for NATO and its Partnership for Peace countries.

Meanwhile Defence Minister Franz Josef Jung said on Tuesday that NATO needed to increase its efforts at education in Afghanistan in an interview with German broadcaster ARD’s Morgenmagazin show.

Afghanistan ought to be equipped with 122,000 of its own trained soldiers and 82,000 police to defend itself, he said. Germany plans to increase its training of Afghan forces in the coming year, but other countries need to commit too, he said.

Jung also rejected international pressure to move German troops into dangerous southern Afghanistan. “We have an assignment in the north, which is half the size of Germany,” he told ARD. “I think our soldiers are fulfilling this assignment excellently,” he said.