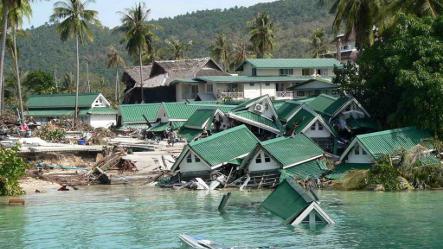 A file photo of the tsunami aftermath. Photo: DPA

“It is a milestone in tsunami early-warning, a unique system worldwide that has been built with the help of German technology,” Thomas Rachel, Parliamentary State Secretary for the Ministry of Research said on Monday in Indonesia.

“It shows that German know-how in the areas of seismology, geophysics, ocean research and satellite navigation is at the forefront worldwide,” he said, referring to the system developed in Potsdam.

In the last year the system has located earthquakes near Sumatra faster and more precisely than the tsunami warning system in Hawaii, Rachel said.

“The most important components of the system are the seismometers and the GPS stages on land,” Rachel said. “The buoys deliver additional information that is not essential to the question of tsunami early warning.” But broadcaster ARD’s news show Weltspiegel reported on Sunday that four of the seven buoys set out have disappeared.

Aside from the seismometers and GPS stages, 23 buoys that feature water level gauges and ocean floor sensors, will be installed. Measured data from all of the components will be sent within seconds via satellite to the control centre and compared with thousands of risk scenarios, informing emergency services within minutes in the event of a threatening tsunami.

Germany will deliver ten of the €200,000 buoys, while others will come from the US and Indonesia. According to Rachel, two of the German models have already been deployed without problems. Four others will be within 25 nautical miles of the coast, two on the sea route toward Indonesia, with another two expected to be deployed early next year.

Nearly 250,000 people living near the Indian Ocean lost their lives in the devastating tsunami on December 26, 2004. In response, the Germany set aside €500 million for the flood victims and according to Rachel, €51 million was designated for the tsunami early-warning system. European experts will stay in Indonesia until 2010 to improve the weak points of the system and educate Indonesian specialists.