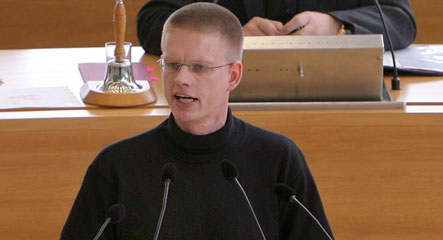 The Berlin chapter of the American Jewish Committee (AFC) condemned statements made by Jürgen Gansel, a deputy in the Saxony state legislature for the far-right National Democratic Party of Germany, against Obama’s election as the first African-American US president.

In a statement from his office entitled “Africa conquers the White House,” Gansel said multicultural America sought the destruction of “pure” national cultures and that Obama aimed to destroy the United States’ “white identity.”

“A non-white America is a declaration of war on all people who believe an organically grown social order based on language and culture, history and heritage to be the essence of humanity,” he said. “Barack Obama hides this declaration of war behind his pushy sunshine

Gansel said Obama’s triumph was the product of “the American alliance of Jews and Negroes” and warned the president-elect enjoyed too much popularity in Germany.

“Many people in the ‘diverse’ republic Germany have been swept up in Obama fever which resembles an African tropical disease,” he said. Gansel said he hoped that Obama’s voters would be quickly disappointed by his performance and rise up against the US government.

“It would be a gross irony of history if the first black president drove his clientele of minorities to openly revolt due to his grandiose domestic failure, and the much-touted American dream became a nightmare,” he said.

The director of the AJC’s Berlin office, Deidre Berger, said she was shocked by Gansel’s “open expression of racism, anti-Semitism and anti-Americanism.” She said the AJC hoped German authorities would look into Gansel’s press release and that German politicians would clearly distance themselves from his sentiments.

“We are investigating the legal situation concerning the statement and will continue monitoring closely political statements using extremist language,” she told AFP. “We urge state authorities to do their utmost within legal bounds to prosecute such incitement.”

The NPD, which professes an anti-immigrant, anti-Semitic platform, holds seats in two eastern German state legislatures, but has never cleared the five-percent hurdle for representation in the national parliament, the Bundestag.