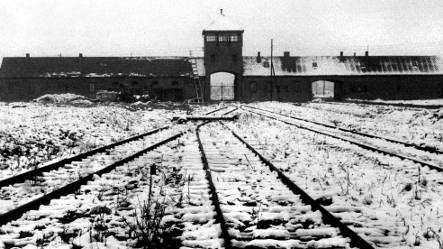 An undated archive photo of the Auschwitz gate. Photo: DPA

The paper, which published a first look at the documents over the weekend, reported that the 28 large-format drawings dating from between 1941 and 1943 were allegedly discovered when the flat was being cleaned out.

Bild published its report on eve of the 70th anniversary of the Kristallnacht pogrom against Germany’s Jews, also known as the Night of Broken Glass, on Sunday.

“I don’t know very much about the origin of these documents,” head of the “Reich” section of Berlin’s national archive, Hans-Dieter Kreikamp, told The Local on Monday. “In cases like these the details are often foggy.”

Kreikamp did say, however, that the pieces were found in a Berlin attic that was possibly being cleaned out after a death approximately two months ago.

The plans, scaled at 1:100 and signed in green ink by the Holocaust’s main organizer Heinrich Himmler, show the camp’s infamous entry gate, as well as detailed plans for a “dressing room,” a “delousing facility,” a “gas chamber,” a “corpse cellar” and crematorium, the paper reported.

“These plans, the earliest of which date from autumn of 1941, prove that organized plans for systematic genocide were underway well before the Wannsee conference in 1942,” Kreikamp told The Local. “Some people think that was the beginning, but it was just a bureaucratic planning session.”

“These are documents in the chain of systematic plans to exterminate European Jews,” he said, adding that the collection of plans also includes correspondence about building dimensions and other details with an SS main administrative office for economic activities in Steglitz.

Judging by the descriptions on the camp plans, there can be no question that those involved were clearly aware of what would take place at Auschwitz, Bild reported.

Auschwitz, located in Poland, was the largest of Nazi Germany’s concentration camps, where some 1.1 million European Jews were killed during the Second World War.

According to Kreikamp, Bild publisher Axel-Springer paid a “five-figure sum” to get the documents, which will later be housed in the national archive in Berlin.