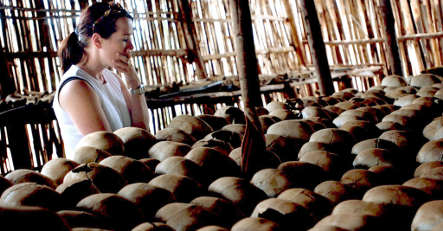 An archive photo of a memorial to the genocide in Rwanda. Photo: DPA

“She is an innocent woman who was arrested on a politically motivated warrant, a warrant issued on the basis of manipulated investigations,” Mushikiwabo told AFP. “This blackmail cannot continue anymore.”

Kabuye is the first Rwandan to be arrested out of nine warrants issued by Bruguiere against close Kagame aides whom the judge suspects of being behind the death of former Rwandan president Juvenal Habyarimana.

His assassination in April 1994 when his airplane was shot down triggered ethnic tensions between Hutus and Tutsis that led to the genocide. The arrest warrants sparked a bilateral diplomatic row resulting in Rwanda suspending ties with France.

Kabuye’s lawyer said she was willing to be transferred to France “as quickly as possible” to speak to French judges. But Mushikiwabo told AFP: “We hope that with this arrest, the whole world will finally know that these arrest warrants have no legal basis. We want the warrants made public. It is time to tell the truth.”

Kabuye had already visited Germany in April as part of an official delegation headed by Kagame. At the time, Berlin acknowledged the government was aware of the French warrant, but said German law prevented it from taking action against representatives of foreign states or delegations it had invited.

This time, Kabuye – a former lawmaker and mayor of Kigali – “was at the Frankfurt airport on a private basis,” a diplomat told AFP on Sunday.

Currently in custody in a women’s prison in Frankfurt, Kabuye could be extadited to France within 10 and 14 days, German prosecutors told AFP on Monday.

“As a general rule when a person is willing to be extradited, the extradition can take place within 10 and 14 days,” said Hildegard Becker-Toussaint, chief prosecutor at Frankfurt’s court of appeal.

Rwandan foreign ministry expressed its “shock and dismay” over Kabuye’s arrest in a letter of protest to the German embassy in Kigali seen by AFP. It said that Kabuye enjoys diplomatic immunity, was on a “working visit” to Germany and “should be treated with courtesy and dignity by the German authorities as it is required by diplomatic decorum.”

The Rwandan government on Monday called for street demonstrations to protest against the arrest. Cars driving across the capital Kigali blared a government statement through loudspeakers announcing that offices were closing at 2:00 pm and urging civil servants and all members of the public to join the demonstrations.